The scientific explanation why food photos on Instagram makes 'drool!' -->

The scientific explanation why food photos on Instagram makes 'drool!' 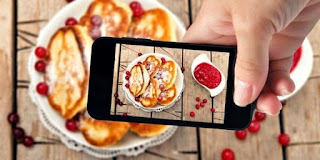 Divides the foods that we eat on social networks like Instagram, Twitter, or Path, no doubt so new phenomenon. Many felt the lump when it comes to a restaurant with a unique presentation of the food, but not photographed beforehand.

Why does this happen?

From a study in 2012, published in the US National Library of Medicine National Institutes of Health, concluded that only by looking at photos of food, enough for a human body releasing hormone ghrelin, a hormone that signaled hunger.

It is also influenced by the working mechanism of the human brain is quite complex. According to Gabriella Petrick, a professor of Nutrition and Food Studies at George Mason University, just by thinking we're throwing a baseball, our brain reacts as if we actually throw a baseball.

"When we eat something, some parts of the human brain reacts differently. Not just the taste, our brain will also store forms, sounds, and things that construct these foods," he said. This is what makes our brain 'called' just by looking at photos on Instagram.

Aside from the scientific aspects related to the mechanism of the reaction of the brain and visualization of the food, it also affects other aspects of our love of the food photos in social media are often called 'foodporn' this. This includes the level of interest of feeding activity which were the main concerns in life, until human nature is to try new things and to follow trends.

If you think this happens only in the era of Instagram, you are wrong. Because since ancient times, so our brain reacts to food. The proof, the ancient times people make paintings of food.

Researchers from the Food and Brand Lab at Cornell University tried to find out why a photograph of food alone can make us 'drool.' From the research, the scientists in cooperation with the Johnson Museum of Art to see the various paintings from centuries ago, which has a relationship with food.

The conclusion was finally quite unique. After checking about 140 paintings of food from Western Europe and the United States, researchers concluded that humans are much like the food was 'beautiful' visually long ago. If now it is expressed through photographs, paintings ancient use.

In fact this has happened since hundreds of years ago. "The love we are to the food visually compelling and luxurious, is by no means new. It has been going on since 500 years ago," said Andrew Weislogel, one of the authors of the research journal.

Interestingly, similar to Instagram photo content of food that we often see, most of the paintings in the ancient times also contain unhealthy food in the present. This includes a variety of salty foods, sausages, as well as many types of bread.

In addition, food in ancient paintings tend to reflect the luxury and social status. This is because a lot of the types of luxury foods painted, such as lobster and red meat. Painting in ancient times is also used to express aspects of culture, religion, and politics to connoisseurs of paintings. Of course it is very different to how we take pictures of the food today who just want to share the delicious food that we eat.

Yep, if we associate with the phenomenon of the moment, certainly not human behavior is not changed, just changed the medium alone. This is based on the brain mechanisms that certainly did not change.
InstagramNewsPhenomenon of the MomentPhotoPhotographyShareTechnology
Comments