Waste Water it can be used as an Alternative Energy -->

Waste Water it can be used as an Alternative Energy 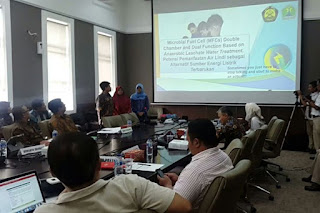 Waste water or can be called leachate appeared to have usability and can be utilized as an alternative renewable energy. © 2016 Merdeka.com

Water generated from garbage or so-called leachate was also to be used for useful things. Utilizing this water, Bappeda Malang try him as an alternative source of renewable electrical energy.

It was the one who filed the winners of the innovation in the Malang city Bapedda representative exposure Energy Award nominee in the Ministry of Energy and Mineral Resources in 2016. On that occasion, Hardiansyah nominees were elected was also accompanied by the head Bapedda Malang, Drs. Wasto. Innovation and technology presented itself named as a Microbial Fuel Cell (MFCs) Double Chamber and Dual Function Based on Anaerobic Leachate Water Treatment.

Background The emergence of innovation is due to population growth and urbanization are quite high in Malang. The impact is in the form of high load of rubbish that reaches 600-800 tons per day which is capable of producing 800 liters of leachate per day her.

Leachate itself is a liquid produced from exposure to rain water on the trash heap. Leachate carrying suspended and dissolved matter which is a product of waste degradation.

"The composition of the leachate is affected by several factors such as the type of waste deposited, the amount of rainfall in the landfill and the specific conditions of these dumpsites" explains Hardiansyah.

Concentrated liquid from the landfill that are harmful to the environment that is known as leacheat or leachate. This fluid derived from the process of percolation / mixing that generally comes from rain water that goes into the trash heap. This mixing causes the ingredients to be extracted from waste dissolved or blend.

To reduce the danger level, this fluid must be treated on an aerobic or anaerobic treatment plant before being discharged into the environment. High levels of COD and ammonia in the leachate could reach thousands mg / L, so the leachate treatment should not be done haphazardly.

Because of a long process, the City Government of Malang through Bappeda Kota Malang seeks to facilitate Hardiansyah to create a work that innovation and technology in order to take advantage of the presence of leachate that can be used around the landfill supit Urang community as a source of renewable electrical energy.

"The hope is to create a good image of the waste in the community realize energy self-sufficient and provide motivation for communities to optimize the utilization of biomass for conversion to the environment surrounding alternative energy" said Wasto.

"It is also a proof that the creative potential in Malang was very nice," he continued.

Bappeda also plans to develop the creative potential of citizens to form a community together as a container and a gathering place for innovators to discuss and apply the results of their work.

Not only that, the government will also bridge the work of these innovators to be patented and marketed by cooperating Malang Creative Fusion (MCF) and the Creative Economy (Bekraf).
Alternative EnergyInformationLeachateMalangTipsWastewater
Comments