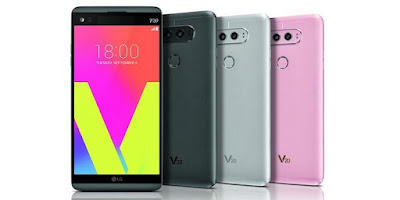 LG V20 officially rolled at an event in San Francisco, USA. Smartphone became the first in the world runs on the Android operating system 7.0 (nougat).

As LG G5, pinning V20 dual camera system and a second screen located on the side of the phone. Only two skills are now getting maximized.

Such specifications coupled with supporting features a sort of dual-LED flash, auto focus laser, as well as stabilizer OIS anti-shake.

Meanwhile, a second screen display second alias is now more teeth with a brighter light as well as 50 percent larger letters. Users more easily and quickly when so many applications open at once.

Another capability that is reliable is the audio. LG V20 seem to want to spoil the alias audiophile audio lovers.

The Flagship is equipped with features 32-bit Quad DAC Hi-Fi, which is a new technology that is capable of producing crystal clear sound like a concert or the theater directly. LG claims V20 is the first phone that embed these features.

As for the other specs include a 5.7-inch phone 4 GB RAM, Qualcomm Snapdragon processor 820, and 3200 mAh battery. The phone is available in three colors, namely pink, silver, and black. Has not disclosed the price and availability of this phone on the market.
AndroidLGLG V20Nougat First Android SmartphoneProcessorQualcommSnapdragonTechnology
Comments