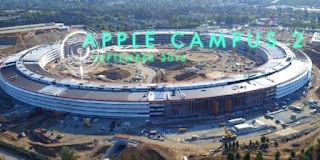 Update the construction of Apple Campus 2 on September 2016

Apple Campus 2, which stands on 70 hectares of land to start "living". Some of the trees planted in certain areas. Garden architecture was already visible.

If compared to September 2015 and then, there's been some increase in construction by September 2016, as recorded in the video drone BGR reported on Monday (09/05/2016).

The most striking difference appears in the walls and roof of the building. Installation of glass covering the second campus of Apple's nearly complete.

Meanwhile, the installation of solar panels solar panel alias already covered almost half of the top side of the building. September last year, not a single solar panel attached.


When already in operation later, Apple Campus 2 is expected to accommodate about 12,000 workers.

Apple Campus 2 Intangible buildings intact, but rather a combination with green open spaces. The plan is about 80 percent of the office complex is green space containing 7,000 trees.
Apple Campus 2BussinessGarden ArchitectureTechnology
Comments