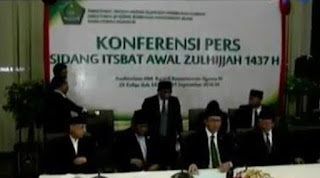 Determination of Eid al-Adha by exposure rukyat team reckoning in the Council confirmation.

The Supreme Court of Saudi Arabia, as reported aljazeera.com, Friday, September 2, 2016, has called on all Muslims in all regions, including Sadir and Tamir, to sight the new moon on Thursday evening, 29 Dhul-Hijjah.

But the moon is not visible. Finally, the number was later date Zulqadah month is rounded to 30 days.

By doing so, the pillars of hajj ie standing at Padang Arafah will take place on Sunday 9 Dzulhijjah 1437 or 11 September 2016, which was then followed by the Eid al-Adha.

Eid al-Adha on Monday, September 12, 2016 is the same as that set by the government of Indonesia in the confirmation hearing in Jakarta, Thursday, September 1, 2016.

"We just completed a confirmation hearing to determine the beginning of the month of Dhul-Hijjah. When the confirmation hearings before we agreed to set the Eid coincides on Monday, September 12, 2016," said Minister of Religious Affairs Lukman Hakim Saifuddin.

Lukman said that, based on the exposure Tim Hisab Rukyat Ministry of Religion, known position of the moon has been under the sun.

Reckoning calculations are then confirmed by the method rukyat. From the number of officers who conduct monitoring at a number of points, reported none who saw the new moon.

That is, the beginning of a new Zulhijah falls on Saturday, September 3, 2016. The trial isbat conducted behind closed doors as the current session of determining the beginning of Ramadan and Syawal 1.