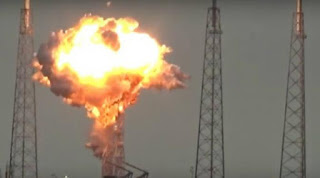 Florida - rocket Falcon 9 SpaceX belonging exploded at the launch site Cape Canaveral, Flordia, on Thursday, September 1st local time. As a result of the incident, the satellite which will be launched on Saturday, September 3 also destroyed.

SpaceX says no casualties in the blast which he calls the 'anomaly'. The company CEO Elon Musk, said in his Twitter account that the explosion occurred when do refueling, but the exact cause is unknown.

The incident, which occurred at 9:07 am local time, a series of explosions that lasted for more than four minutes.

"This anomaly came from around the oxygen tank top and occur during refueling," SpaceX said in a statement.

Quoted from CNN, Friday (02/09/2016), the Falcon 9 carrying a satellite Amos 6 used by Facebook to bring internet access to Africa, the Middle East, and Europe. The satellite is owned by the Israeli company, Spacecom.

Facebook in cooperation with Eutelsat Communications, plans to use Amos 6 to provide internet coverage for parts of sub-Saharan Africa as part of the initiative Internet.org.

"I'm very disappointed to hear that the satellite launch failures SpaceX destroy us," said the CEO of Facebook, Mark Zuckerberg, in a posting. "However, we remain committed to our mission of connecting everyone," he added.

According to the BBC, an official of leading aerospace Israel said the destruction of the satellite Amos 6 worth more than US $ 200 million be a major blow for them.
Elon MuskExplosionFacebookFalcon 9RocketSatelliteSatellite Amos 6SpaceXTechnologyTwitter Account
Comments