The competition was participated by universities from various countries including Mongolia to host this competition. The competition was held on 21-22 September 2016 in Ulaanbaatar, Mongolia, is organized by the Asia-Pacific Space Cooperation Organization (APSCO) in collaboration with the Information Technology, Post and Telecommunication of Mongolia (Mongolia ITPTA). 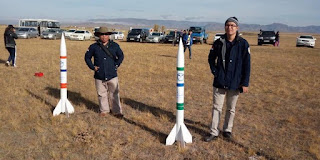 There are ten teams registered and participated in the competition CanSat 2016. After CanSat launched by rocket, CanSat should be able to take atmospheric data, such as altitude, temperature, air pressure, humidity, and others, then send it to the ground station. Tim Garuda also embed multiple sensors in its CanSat so it can take atmospheric data, such as temperature, air pressure, humidity.

In addition to atmospheric data, the team was also able to process data Garuda CanSat attitude towards the earth, such as longitude, latitude, elevation, and orientation. CanSat team Garuda is also equipped with a camera to take the image of the object that were previously determined by the committee. It is intended that the participants were able to simulate the actual task of satellites capable of taking and sending images of the Earth. After going through the process penjururian, the jury decided the champion runner-up given to the team Garuda Gunadarma University, Indonesia.

Third place was won by Team Sky Defender of Military and Defence University, Mongolia. Meanwhile, the first prize won by the team APIS from Istanbul Technical University, Turkey, which only differ from one score of the team Garuda.

"This is a very proud achievement for us and the citizens of Indonesia in general, given the new Gunadarma this time CanSat competition following the international level," said Purnawarman Moses, supervisor Garuda team as a press release received recently.
CompetitionGaruda International CanSatGunadarmaIndonesiaLAPANSuccessful Student TeamTechnologyUniversity
Comments