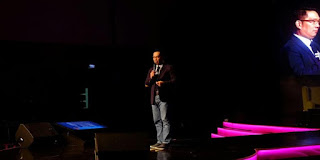 For most active users of social media, every post his uploaded will feel happy when many of his followers leave a mark 'like'. In that regard, there was an interesting experience about the phenomenon of 'like' as told by the Mayor of Bandung, Ridwan Kamil.

Understandably, she was active users across multiple social media. The man who is familiarly called Emil Kang, tells his story in front of all the conference participants Ideafest 2016 when Saturday (09/24) in Jakarta Convention Center (JCC).

According to him, he experimented with posting photos as usual and the photo is not clear at all, aka just plain black color only on his Instagram account. As a result, it is more inviting 'like' in posting a plain black image. How come?

"As it turned out, when I noticed it was not for the image or picture, but the caption also have an influence," he said to laughter participants of the whole room.

In posting photos uploaded on June 23, 2015, there is a photo caption that indeed tickled his followers. The post harvest 'like' up to 25 thousand. 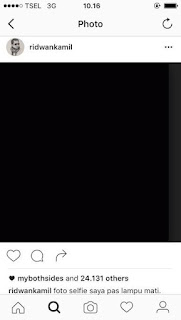 "My selfie photos fitting lights are off. Not bad. Good night," he wrote in the photo caption.

He was also showcased follower his Instagram which has reached 4.2 million. According to him, a follower of his Instagram will continue to be treated for later retirement provision. The reason, he never received information if it has a lot of followers on social media, it could be endorsed by the capital for a product.

"Once endorsed he could be IDR 6 million. If we counted passable anyway. So I wrote for the provision of care when you're retired so the mayor," he said to laughter again.
BandungEmilIdeaFestJakarta Convention CenterKang EmilRidwan KamilSocial media posts can be a lot of LikeTips
Comments