Without the glasses, the mechanism dogs and cats drink? -->

Without the glasses, the mechanism dogs and cats drink?

Dogs and cats are both very enthusiastic in terms of eating and drinking, invite a lot of questions about the mechanics of how to eat them. For the matter of eating, may not be too matter. Its mystery is how the mechanism of the cute animals to drink?

Naturally they can not just flapping his tongue into the water to drink. It turns out there is a way to 'transfer' the water from the bowl, to the mouth.

In 2014 then, Sunny Jung of Virginia Tech using high-speed cameras to film the dogs were drinking water from the bowl. They then check it by making video 'slow-motion'.

From these findings, dogs and cats bend backwards to form a tongue like a ladle, so that he could enter the water to the mouth. 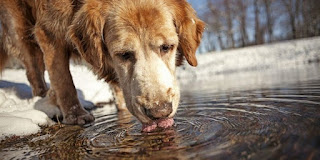 Because dogs and cats do not have cheeks, they can not suck like a human. To 'push' water enters the stomach, dogs and cats do this and in normal speed, it looks like their tongue 'slap' water. In fact, they're pushing water into his throat in the form of lumps, and immediately swallowed it. All of this happened so quickly, only a fraction of a second.

Although similar, there are fundamental differences between dog and cat drinking mechanisms. Cats much more picky, and more 'elegant' in drink. This is because cats are not 'slapped' tongue into a bowl of water, but he did it with gentleness. It makes cats are not noisy and not a 'spurt' everywhere when he drank.
Drink MechanismFoodGlassesmechanism dogs and cats drinkSlow MotionWater to Drink
Comments