About the 48 World Cup team, Guardiola: We Will Kill The Player -->

About the 48 World Cup team, Guardiola: We Will Kill The Player 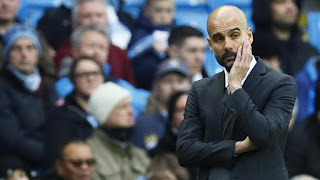 Manchester - Manchester City manager Pep Guardiola was pleased with the idea of ​​increasing the number of World Cup participants. He considered it only adds to the burden on the players.

The idea to add the World Cup participants have been circulating since the past few years. The plan will begin in the coming 2026. Similar ideas have been implemented in the European Cup in 2016, where participants become 24 countries from only 16 countries.

Although this idea will increase the chance to appear for countries that have never participated in the World Cup, but on the other hand is deemed a negative impact. The duration of the tournament getting longer because the game more, because it will be exhausting the players even from the times of preparation.

Guardiola is one of the less agreed with the idea. Because with football when competitiveness is increasingly competitive and increasingly large demands, the players actually supposed to be protected.

They deserved to be given the opportunity to rest more, rather than increase the burden of physical and mental.

"It's not just the case for English football, but the entire world. Now they are talking about the World Cup contains 48 teams, we will kill the players," said Guardiola told Sky Sports.

"FIFA will decide and we accept his decision, and if we were not happy so we went home. They are focused to add, add, and add, it affects the quality. I just think for the players."

"They need to breathe, it needs to rest, need to enjoy football. This sort of thing is impossible because we will finish the season, then once a week for the World Cup, and then after three weeks we to pre-season, we went to China, USA, Australia."

"You play against Milan, Juventus, Madrid, and you have to win. People sue you for playing well. There is no preparation and then you come back to play and drove 11 more months, and then came the European Cup," said the former coach of Barcelona and Bayern Munich this.
AFPDetail NewsEuropean CupFollow AFPFootballFootball WorldJuventusMadridManchester City ManagerPep Guardiolaplay against MilanSportWorld Cup
Comments