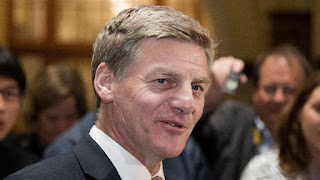 English ensure that religious views should not affect how the lead. (AFP Photo / Marty Melville)

A week after John Key resigned as Prime Minister of New Zealand, Bill English officially took over the post on Monday (12/12).

English selected as New Zealand Prime Minister at a special meeting of the National Party caucus, where Key shelter.

"I am very excited and honored to have this opportunity," says English after attending the meeting, as quoted by Reuters.

Although not yet taken his oath, Bill English already announced a number of people who will fill his cabinet.

He pointed to the Social Housing Minister, Paula Bennett. English also delegated the task before the New Zealand Finance Minister to the Minister of Economic Development, Steven Joyce.

Shortly after the meeting took place, a number of journalists directly asked English about religious influence in his style of leadership in the future.

English known as a conservative Catholic. Previously, he had publicly opposed same-sex marriage, abortion, and euthanasia.

Now, he claims to still be an active Catholic. However, the tone English jokingly say, religion can not guarantee perfection.

"It affects how I pass judgment, my awareness. I realize that other people have different beliefs. That is (religious) will not affect my leadership," said English as reported by Radio NZ.

Apart from a number of controversies, Bill English is already predicted to be the strongest candidate to fill the vacant seat left by PM Key last week. He even received direct support from the Key.