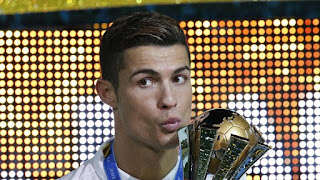 Ronaldo was the star as Real Madrid beat Kashima Antlers in the final of the Club World Cup on Sunday (12/18/2016) yesterday afternoon. The 31-year-old star of the Portuguese scored three goals to give Real Madrid a 4-2 lead in a match that must be resolved through the extension of time.

The success of winning the Club World Cup becomes a cover for 2016 is perfect for Ronaldo. It becomes second trophy which he achieved in a week, after last week she was chosen as the best footballer the world and deserved the Ballon d'Or.

"It's a trophy that truly we want at the end of the year and is found in the best way we could do," Ronaldo said after the match.

"I do not think it would end like this: win in the final, scoring three goals, and helped Madrid. I want to thank my colleagues once again, because I can not be alone win trophies without them," he was quoted by the BBC.

In May, Ronaldo also successfully put Madrid win the Champions League. While in the middle of Portugal he gave the status of European champions.

must read : about of Cristiano Ronaldo

On the successes obtained in 2016, Ronaldo also managed to carve out a new record. He became the first footballer to win the Champions League, European Cup, the Ballon d'Or and the Club World Cup in the same year. As quoted by The Sun.