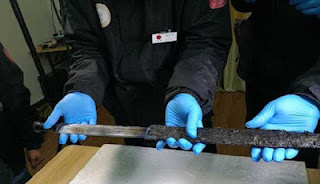 Objects that contain iron, will usually corrode, rust, even destroyed if stored even buried in the ground without protection. Likewise with the sword, which is mostly made of iron.

But, Chinese archaeologists were surprised to find an ancient sword that had been buried more than 2,300 years. In fact, they found the sword is still in perfect condition like new is created.

Likewise with the sharpness of this sword, which is visible from the color that is still shiny. So who is this sword? And how this sword almost perfectly still when found?

This sword is the traditional weapon of China, which was found in a coffin fashioned in Henan Province in central China, where Chinese civilization thought to have originated.
This sword was found by archaeologists from Henan province, and is believed from century BC 475-221.

They are very cautious when issuing a sword filled with mud from the coffin. Archaeologists also clean up and remove the sword from its scabbard, on December 30 and they found the sword still perfect.

A staff member who filmed when two archaeologists issued this sword, immediately upload footage to an official account on Weibo institutions in the same day.

And video clips of 12 seconds duration too, has been viewed more than nine million times. Audiences were stunned by China's ancient sword-making skills, whereas a deadly weapon has been buried more than two thousand years.

Wu Zhijiang, the leader of this team explains that, ancient tombs in Chu normally closed to the outside world, thus creating a moist environment, and weapons will not oxidize easily.