8 Men's Intellectual Property Equals With Half of World Population -->

8 Men's Intellectual Property Equals With Half of World Population 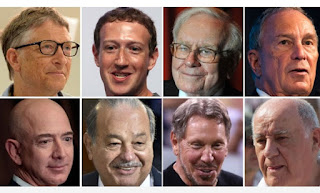 LONDON - Eight men have wealth equivalent to that owned half the world's population, the level of inequality that threatens divided society according to the Oxfam report on Monday (1/16/2017), before the opening of the World Economic Forum in Davos.

According to Oxfam, the wealth of the poorest 3.6 billion people in the world is equivalent to the combined net worth of the six American businessman, a businessman from Spain and other businessmen from Mexico.

Data confederation of non-governmental organizations working with partners to end the injustices that cause poverty that shows the relationship between the magnitude of the gap between rich and poor and the growing dissatisfaction with mainstream politics throughout the world.

"From Brexit to the success of the presidential election campaign of Donald Trump, rising concerns about racism and the widespread disillusionment with mainstream politics, there are increasing signs that more and more people in rich countries are no longer willing to tolerate the status quo," said Oxfam in a report the latest, entitled An economy for the 99 percent.

The charity organization was declared the new data on the distribution of wealth from countries like India and China have prompted them to revise the count after last year the wealth of half the world's population is in the hands of 62 people.

Inequality will be one of the main issues at a gathering of political and business elites that took place in Davos until Friday, when about 3,000 people gathered for the annual meeting of the World Economic Forum (WEF).

"Responsive and responsible leadership" was chosen as the theme of the meeting was to respond to the "backlash against globalization that leads to two voting results shocking and rising populism in the West" according to organizers.

In its report, Oxfam called for an increase in tax rates for the "wealthy individuals and corporations" as well as the global agreement to end the competition between countries to reduce the corporate tax rate.

Oxfam also criticized the lobbying firm and the proximity of business and politics, calling on lobbying registration obligations to the public and strengthening the rules regarding conflict of interest according to news agency AFP.
Amancio OrtegaBill GatesBrexitCarlos SlimIntellectual PropertyJeff BezosLarry EllisonMark ZuckerbergMichael BloombergNewsone of the main issuesOxfamSkynewsWarren Buffett
Comments