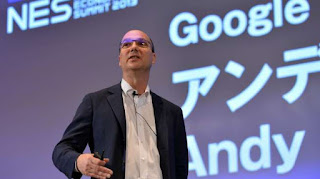 Former officials who created the Google Android smartphone can serve to make known to the middle of the upscale market.

After more than two years of leaving Google, Andy Rubin reportedly was busy preparing the new smartphone. Rubin, known as the creator of the Android operating system, is planning to marry a background in software with artificial intelligence (AI) in the consumer hardware.

An enterprise platform designed to bind to multiple devices together, working on consumer hardware products, including for homes and smart cars.

Reportedly, the company will build a high-end smartphone with a large screen that does not have a curved bezel around it. At the Consumer Electronics Show (CES) in Las Vegas in early January, Rubin disclose executive smartphone with mobile operators, including Sprint Corp., people familiar with the talks said.

Rubin registering Essential Products Inc. with the regulator and California in November 2015. At the end of 2016, the company registered as Essential to the US Patent and Trademark Office, register smartphones, tablets, accessories and computer operating software for mobile phones, as the goods and services to be traded.

Although Rubin is the creator of Android, not certain the device will run on Android based software or the other.

While still in the prototype stage, Rubin phone aimed at the top of the market where Apple Inc.'s iPhone and new pixel belongs Alphabet Inc. located. It is expected to be made from high-end features and capabilities of new hardware from time to time.

Rubin sell Android to Google in 2005. He spent eight years at Google, change the operating system from a small project into the software of the most dominant in the world. In 2013, he resigned from Google's Android establish robotics unit before leaving altogether in 2014. The next Rubin Enterprises is a startup incubator called Global Playground, which is engaged in the field of artificial intelligence (AI), robotics and augmented reality projects (AR).

Rubin confident AI will be a great change through the technology industry.

One prototype phones Rubin will have a larger screen than the iPhone 7 Plus (5.5 inches), but overall will be smaller because of the lack of bezels. Startup is experimenting with allowing the phone screen to sense varying levels of pressure, similar to the iPhone.

Rubin team is testing the industrial design with metal sides and back are made of ceramic, which is more difficult to be a basic material production typical smartphone.

Reportedly, the company is developing a proprietary connector that doubles for charging the battery and extend the function of the phone from time to time. Magnetic connector will allow important or even third parties to create hardware accessories that add features to the smartphone.