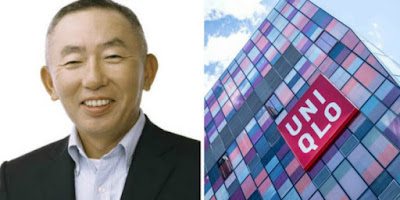 Why would he blame the weather?

A Japanese billionaire Tadashi Yanai, loss of property valued at US $ 1.4 billion or IDR 18.66 trillion. This man lost the property in one day!

Reported from Next Shark, Sunday, January 15, 2017, assets IDR 18.66 trillion vanish when his clothing line, Uniqlo, reported a decline in sales during December 2016.

Uniqlo also shares plummeted 6.7 percent. The decline was the biggest stock in 2017. As a result of the loss of property, the position of Yanai was thrown 6 levels to rank 44th in the list of Bloomberg's Billionaires Index.

Uniqlo Japan blamed the unusual warm weather make them lose a couple of winter clothing. Sales were also down 5 percent.

However, Yanai remains the richest man in Japan. He still pocketed treasure very much. Value reached US $ 17.2 billion (IDR 229,24 trillion).

For your information, in addition to having Uniqlo, Yanai is also the chairman, president, and CEO of Fast Retailing, Uniqlo subsidiary. The clothing distribution company first opened in Hiroshima, Japan, in 1984. Then, on December 31, 2016, has 841 Uniqlo stores in Japan.
Bloomberg's Billionaires IndexClothingcouple of winter clothingJapan RichestJapanese BillionaireNewsNext SharkTadashi Yanaithe richest man in JapanUniqloUniqlo Clothing
Comments