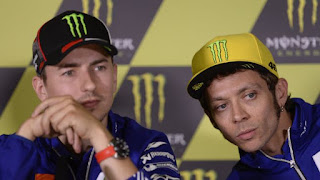 MotoGP veteran rider, Valentino Rossi, said he was very pleased when she first knew Movistar Yamaha Jorge Lorenzo left. However, Rossi believes that the same situation will occur with the arrival of Maverick Vinales.

In an interview with MCN, Rossi was grateful to hear Lorenzo chose to move to Ducati. Because, The Doctor had an antagonistic relationship with MotoGP world champion three times that.

"When I first knew Lorenzo will leave, I thought 'ah, great!'. Very difficult to have a fast teammate like Lorenzo, "said Rossi.

"I think it's better to have another teammate. But, now it seems to be the same as the arrival of Vinales. "

If you could choose who will become his teammate at Yamaha in two seasons ahead, Rossi said they would vote Repsol Honda rider Dani Pedrosa.

"But, I have no right under the contract to decide teammate. Yamaha decided without my intervention, "he continued.

MotoGP 2017 season will start at the Losail Circuit, Qatar, on 26 March. While the next official test will take place at the Sepang Circuit, Malaysia, the end of January 2017.
2017Jorge LorenzoLosail CircuitMotoGPMotoGP 2017MotoGP 2017 SeasonNew YearQatarRection of RossiSportValentino RossiYamaha
Comments