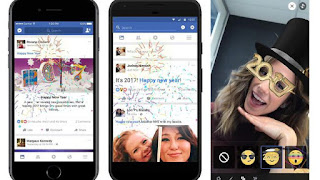 New Year festive celebration is celebrated in various parts of the world, without exception by social media users. Facebook celebrate the turn of the year with the release of an exciting animation.

Each time a user creates a status, comment on posts made friends, and reply comments of friends.

CNet cites, every time it says 'Happy New Year', the text will be changed into blue and when touched issuing a 'fireworks'.

Not just released a fireworks animation, social media services owned by Mark Zuckerberg is also released in the form of sunglasses and a mask filter.

Last year there were 182 million users to make greeting the new year and there are 370 million photos and videos shared. When moments last turn of the year 2016, submissions to the turn of the year was given 3 billion a reaction from Facebook users.