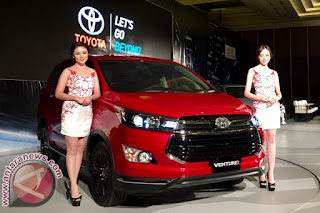 "An investment in Innova Venturer at IDR95 billion, mainly for tooling parts. Tooling its done in a supplier. Plus there are also some equipments," said Vice President TMMIN Warih Andang Tjahjono on Monday.

As for the level of local content, he said, remains the same as previous Innova 85 percent.

"Local content, we still keep it at 85 per cent, of course we are trying progressively increasing," said Warih.

In addition, mention the sales target, Toyota does not call explicitly. Compared to the type of Q which is a variant of the previous highs, Toyota is targeting a market share of 10 percent for this New Venturers.

"In the past sales of Innova type Q contributes about 8 percent of the total sales of Innova, so the presence of this Venturer which is a type of premium, could contribute approximately 10 percent," said Product General Manager of PT TAM Agung Sri Handayani.