These simulations show such a site within 250 million years! -->

These simulations show such a site within 250 million years! 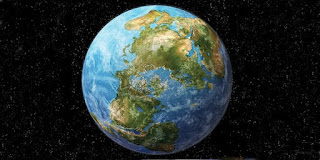 Ever imagined how the shape of the Earth in the future? Scientists have already done so, even in the very distant future, which is 250 million years old.

Reported by the Daily Mail, a simulated Earth's future conducted by a team of researchers from Yale University and the Department of science and technology and marine Earth Japan. Research published in the journal Nature revealed that tectonic plate movement will change the map of the world.

True, later on the north and south part of America will become one, while the Caribbean Sea and the Arctic will disappear. In addition, the Asian continent will converge with the American continent.

The tectonic plates of Earth's crust is so causes the movement of continents that have occurred hundreds of millions of years ago.

Research and simulation is based on a theory called Orthoversion, where after a separation of the continents, its share would move away from its original site but remain stuck in the plates north and south. Until later in the Pacific Ring of Fire, there will be a 'supercontinent' that will be created from the movement of these plates.

Not only Asia and America are united that may later be called Amasia continent, but over time the European continent will 'run over' by the movement of the two continents.