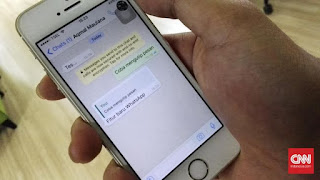 One of the features in Whatsapp (Photo: CNN Indonesia / Aqmal Maulana)

This is probably the most anticipated feature millions of users WhatsApp worldwide. Someone mentioned not known currently testing a feature called Edit, and REVOKE.

Both of these features are basically very useful for WhatsApp users who accidentally sends the wrong message or typo message to another number.

According to sources quoted dailystar, with REVOKE feature users can retract a message that was already sent to someone within a certain time limit. Of course, the receiver having drawn the message will not be able to read the message.

Meanwhile editing features, allowing users to edit the text that was sent to another number. This is perfect for users who frequently typo or wrong in writing a message.

How to use these two features was reportedly very easy, users simply press a few seconds the message is sent, then there will be two features that appear the edit and REVOKE.

REVOKE special feature can be used to message recipients do not open or read messages sent. Thus, this function will be useless if the message that is sent is already 'two blue tick.'

Not yet known exactly when these two features will be thrown to the user, but it seems like they had done before, WhatsApp will give some sort of beta version to users Android as happened when releasing the Video Call feature some time ago.