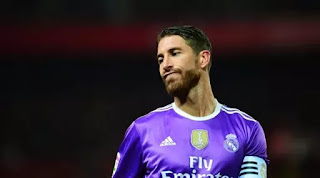 Ramos scored against Real Madrid in the 85th minute.

Coach of Real Madrid, Zinedine Zidane could not hide his embarrassment after Sergio Ramos in his own team's goalkeeper Ramón Sánchez Pizjuán Stadium, Monday (16/01/2017) early morning in the Spanish League.

Ramos scored an own goal in the 85th minute. Sevilla goal was to make the score to 1-1, before winning thanks execution Madrid Cristiano Ronaldo penalty kick in the 67th minute.

"Obviously this is a shame. Playing like that in the 85th minute, then lost points that should be ours. But that's football," Zidane said, quoted by Sky Sports. 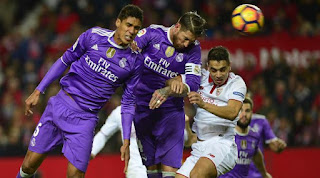 However, Zidane does not want to blame Ramos entirely on the cessation of the record is not terkalahakan the club nicknamed Los Blancos. Real Madrid's record halted in all 40 games. Los Blancos won 30 wins and 10 draws.

"Ramos has been playing well. I am very pleased with the performance he does for Real Madrid. He plays with his personality," said the French coach.

This defeat became the first felt Madrid and coach Zinedine Zidane since the 0-2 defeat of VfL Wolfsburg in the Champions League on April 6, 2016.

"I should be proud of the players for all they've done. I know it (defeat) this is going to happen. Now we have to work hard in the Spanish League competition," said Zidane terminate.

These results make Madrid just one point ahead of Sevilla who are in the second position of the standings and two points clear of bitter rivals Barcelona trailing in third position. But Madrid still have savings of the game.
FootballKeylor NavasRamos Own Goalreal madrid lostsavings of the gameSergio RamosSevillasevilla real madrid beatSportZidane
Comments