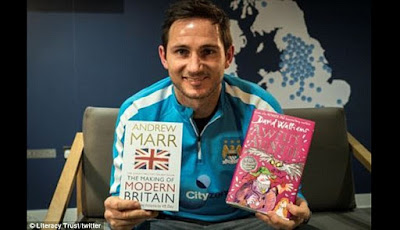 Former Chelsea midfielder Frank Lampard, has finally decided to end his career as a soccer player on Thursday, February 2, 2017. The decision was taken Lampard after he thought for a moment after his contract with the club, United States, New York City, ends this season.

The decision was announced Lampard through social media, His Instagram Account. He uploaded a photo along with an explanation that is long enough.

In the photo caption he explained that he actually get a number of bids to extend his 21-year career as a football player. But he finally decided to retire.

"After 21 years of an incredible career, I decided that now is the right time to end my career as a professional footballer," wrote Lampard.

"Although I received a number of tempting offers to continue playing both in England and abroad, by the age of 38 years, I think this is the time to start a new chapter in my life."

"I am very proud of the number of trophies that I have won, strengthen my country more than 100 times and scored more than 300 goals," he continued.

Lampard also thanked all those who had been instrumental in his career, including his wife Christine.

"I am grateful to many people. Thanks to my parents who have instilled the values ​​of hard work, dedication and professionalism. The value that I continue to hold in every thing I do," he said.

"I am also very grateful to my family, my wife Christine and my two daughters, Luna and Isla. What have you done for me off the field when play is my strength. I really love you," he continued.

He considered the most beautiful times in his career was when he for Chelsea where he managed to present all the titles ranging from the Premier League to the Champions League.

He also thanked the West Ham United which is the first club he is in pursuing Karia. So even Manchester City and New York City who became the last port Lampard.

"Also to all the friends and teammates were always there for me. I want to thank colleagues, coaches, managers and all the staff who have worked with me. I am honored to work with you."

"I am also grateful to all the clubs I've ever been strengthened. First, West Ham United are on my debut in 1996. Thanks to everyone there that has given me confidence when I was young.

"Also to Manchester City and New York City FC. I really enjoyed the last years I played at two clubs and appreciate the support I have received from the City Football Group and the supporters of both clubs"

"Of course, most of my heart are the property of Chelsea. The club that has given me many good memories. I will never forget the opportunity that they gave me and the success we've had together."
ChelseaFrank LampardFrank Lampard RetirementIncredible CareerInstagramNew York City FCSocial MediaSport
Comments