Mark Teixeira Is Expected to Join ESPN as an Analyst -->

Mark Teixeira Is Expected to Join ESPN as an Analyst 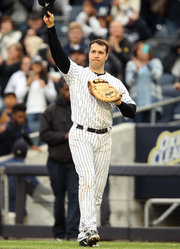 Teixeira after the final game of his career in October.
Credit Danny Wild/USA Today Sports, via Reuters

Just a few months into his retirement, the former Yankees first baseman Mark Teixeira has already found a way back into baseball: He will join ESPN as an analyst. The network is expected to make the announcement Tuesday.

Known for his frank insights and sometimes blunt appraisals during his playing career, Teixeira is expected to work in the studio and could begin in spring training.

Teixeira previously worked on the radio and was a guest host on ESPN’s “Mike & Mike” show in 2014. He also had a cameo appearance on the Showtime series “Billions.”

Teixeira joined the Yankees in 2009 after signing an eight-year, $180 million contract and contributed to the team’s World Series title that year. He played 14 seasons with the Texas Rangers, Atlanta Braves, Los Angeles Angels and Yankees, winning five Gold Gloves and hitting 409 home runs.

He announced his retirement Aug. 5 and played his final game Oct. 2.