Qatar Airways Open Flight These Furthest in the World -->

Qatar Airways Open Flight These Furthest in the World 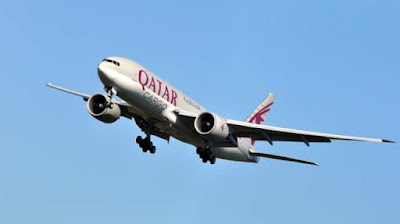 The launch was marked by the flight of Qatar Airways flight number QR920 Capital of Qatar on Sunday morning at 5.02 local time. The plane was scheduled to arrive in Auckland on Monday morning, at around 7:30 pm local time.

Airlines using Boeing 777 aircraft that will take as long as 16 hours and 20 minutes, passing through 10 time zones, five countries, and a distance of 14 535 kilometers.

While traveling on the contrary, Auckland-Doha will take as long as 17 hours and 30 minutes, because the aircraft will resist high altitude wind currents.

With distance and time, then flying Qatar Airways Doha-Auckland was crowned as the farthest flight in the world, reported flightradar24, as quoted by AFP.

As for Qatar Airways does not disclose the number of passengers for the service on Sunday. However the aircraft itself is manned by four pilots and 15 crew.

With this new route, Qatar Airways beat the previous record held by Emirates, owned airline in the Gulf neighbor, the United Arab Emirates. In March 2016 ago, Emirates launched Dubai-Auckland Airport is a distance of 14.200km.
AircraftAirlines Qatar AirwaysEmiratesFlight Furthest in the WorldFlight Number QR920Flight of Qatar AirwaysNewsQatar Airwaystraveling on the contrary
Comments