The heat of the Derby London, 5 Emotional Match Chelsea Vs Arsenal -->

The heat of the Derby London, 5 Emotional Match Chelsea Vs Arsenal 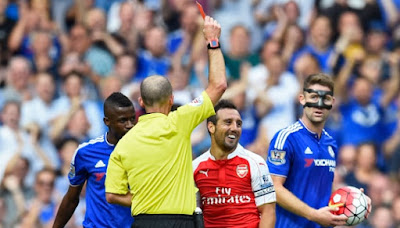 Chelsea secure at the top of the standings with nine points from the second ranked team Tottenham Hotspur and the Gunners were ranked third with both collected 47 points.

The match between the Blues against Arsenal is not limited to the City of London giants duel, but tinged football drama that often occurs when the teams met at various events. Additionally, this game will be loaded race two peracik strategy tactics.

Antonio Conte who coached Eden Hazard and colleagues at the start of the season in 2016 changed the face of the Blues become more flexible team in offense and defense thanks to the adoption of a 3-4-3 formation, leaving the 4-2-3-1 scheme applied during training Jose Mourinho.

On the other hand, Arsene Wenger has coached Arsenal since 1996 has been so fully understand how the atmosphere of the game on a big match like Derby London.

Before watching the match on Saturday, following several emotional match between Chelsea vs Arsenal quoted by Reuters:

Striker Nigeria, Nwankwo Kanu, appear extraordinary to notch three goals within 15 minutes to silence Chelsea were ahead 2-0 through a header Tore Andre Flo and Petrescu.

Arsenal, who at that time were without Patrick Vieira actually perform better towards the end of the second half goal by Kanu in minutes 75, 83 and 90.

However, should Arsenal after Chelsea eliminated painfully turn things into a 1-2 to a goal by Frank Lampard and left back Wayne Bridge which overlap to beat goalkeeper Jens Lehmann.

Didier Drogba, scorer of Chelsea-Arsenal derby with a record 13 goals, scoring twice in the League Cup final which Chelsea won 2-1.

The game was going to be tough with the issuance of three red cards, two for the Arsenal players that Adebayor and Toure, as well as one for the Chelsea midfielder John Obi Mikel.

Initially Arsenal winning 1-0 through goals Theo Walcott in the 12th minute. But the slick appearance of Drogba assisted by Arjen Robben made the Blues took home the League Cup.

Arsenal steal of home to Chelsea a 5-3 win thanks to a hat-trick scored Robin van Persie.

Chelsea was able to lead 2-1 at halftime with goals from Frank Lampard and John Terry, before Van Persie scored one goal on 36 minutes.

In the second half, goals from Andre Santos and Walcott bring Arsenal back ahead 3-2. But the score changed 3-3 after Juan Mata scored for Blue London on 80 minutes Van Persie finally emerged as a hero of the Gunners thanks to two goals scored in minutes 85 and 90.

Chelsea gives the most painful defeat to Arsenal and manager Arsene Wenger at the time even 1,000 games coached Tim Gunner since 1996.

In just 17 minutes, Chelsea goalkeeper Szczesny bombarded with the score 3-0 through sontekan Samuel Eto'o, Andre Schurrle and Eden Hazard penalty. Arsenal 'frustrations after defender Kieran Gibbs was sent off due to touch the ball in the penalty box.