MU victory hero in the game is Paul Pogba and Henrik Mkhitaryan. Each of these players contributed one goal. Thanks to his contribution, Manchester United also successfully won the third title.

Previously, MU has secured the Community Shield trophy and the English League Cup. Success this time also makes them eligible to appear in the Champions League next season.

Tempo immediately run fast, MU first threaten defense Ajax. Pogba is fired speculation from the front of the Ajax penalty box. However, the direction of the ball still deviated from the target.

Precisely the movement of the eyes that could make a back-line Ajax ketar-ketir in the 10th minute. From the left side, it releases the bait which is actually pretty good. Unfortunately Marouane Fellaini is late when it will be titled the ball.


Ajax itself is not without opportunities. They almost scored in the 15th minute. Building an attack from the right side of defense MU, Bertrand Traore kick off directional directed. Fortunately for United, goalkeeper Sergio Romero is in the right position to catch the ball.

In the 18th minute, Manchester United finally able to break the deadlock. Pogba who make supporters MU thunder. Hard kick from outside the penalty box that had hit Davinson Sanchez could not be defeated Ajax goalkeeper, Andre Onana.

In the 24th minute, goalkeeper Onana back to work hard to dispel the MU attack. Fortunately, he is still able to stem the hard kick Antonio Valencia from the right side of MU attack.

In the 37th minute, Traore had time to show stunning action. He dribbled and was able to pass several MU players. Unfortunately when it arrived in the penalty box MU, Chelsea loan striker was just exhausted.

In the rest of the time, Ajax is actually more controlled ball. However, they still can not maximize it by scoring a counterweight. Advantages 1-0 MU also survive until the break pause. 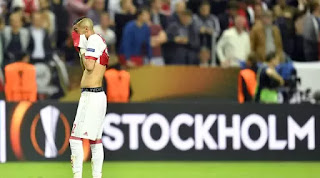 The second half has not even run three minutes, United directly doubled the advantage. Starting from a corner football situation, Chris Smalling's header ball continued with Henrikh Mkhitaryan's kick.

In the 49th minute, United also have the opportunity to enlarge the advantage. Through a fast counter-attack scheme, Rashford dribbled alone into the Ajax defense. Unfortunately, the Rashford ball could be stopped Sanchez.

Until the 60th minute, the second half of the game more dikuasi Ajax players. However, Peter Bosz was unable to find a way to find a gap in the back line MU. When they enter the penalty box MU, Ajax players do not get a space shot.

In camp United, 2-0 lead to make them now more focus to survive. Only Rashford is instructed to be in the opposing area. Speed ​​Rashford was a mainstay MU while launching a counterattack.

In the 65th minute, it is MU that re-create opportunities. Crossing Pogba from the right side of MU's attack greeted Fellaini with a header. But the ball header Fellaini still leads right into the arms of goalkeeper Onana.

Ajax get a chance in the 71st minute with a free kick following Mkhitaryan handball in front of MU penalty box. Unfortunately, the opportunity can not be utilized Judge Ziyech. Kick can not pass through the ranks of living fence MU.

In the remaining time, MU looks have slightly lowered the tempo of the game. While Ajax is still struggling hard to equalize the score. Because of the heat, some physical contact is a little excessive going on.

In the 87th minute, Manchester United got a chance through Jesse Lingard, a player who replaced Mkhitaryan in the 74th minute. Unfortunately, his movement through counter-attack schemes can be stopped Ajax defender. Until the game broke up, 2-0 advantage MU survive.