Nicky Hayden Got Hunching Will Died? -->

Nicky Hayden Got Hunching Will Died?

He had an accident while cycling in Rimini, Italy, May 17, 2017. Drivers with the nickname The Kentucky Kid was cycling when a Peugeot car crashed into him. 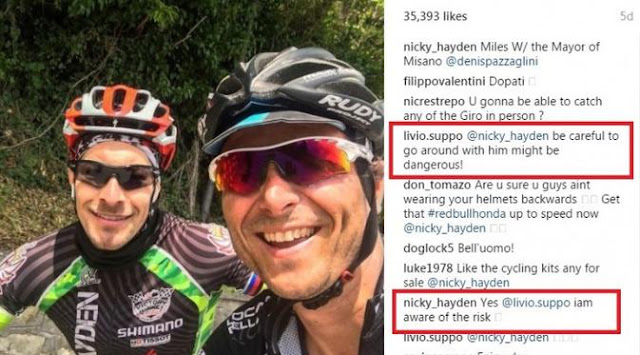 Before cycling, Nicky Hayden had uploaded a photo on Instagram cycling with Denis Pazzaglini, a mechanic from Honda team when he became world champion. Hayden calls him Misano's mayor because Denis was born there.

Interestingly, there are comments from Livio Suppo, friend Nicky Hayden at Repsol Honda Team. Livio says it's very dangerous to ride with Denis.

Received such comments, Hayden replied, "Yes, I know the risks," he replied.

The comment was indeed a joke. However, Nicky Hayden seemed aware of the dangers he was about to face.

Shortly after replying to the comment, Nicky Hayden was hit by a car and his condition was critical. He suffered a coma for five days before eventually passing away on Monday (5/22/2017).
Former world champion MotoGPMotoGPNicky HaydenNicky Hayden DiedRepsolRepsol Honda TeamRossiSport
Comments