After the Rimac Accident, Richard Hammond: I'm Not Dead, really -->

After the Rimac Accident, Richard Hammond: I'm Not Dead, really 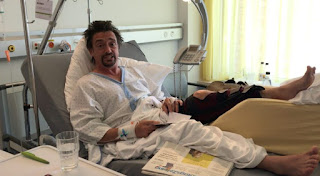 When reporting on the accident that Richard Hammond experienced while working on the series The Grand Tour the second season, where Rimac Concept One that dikmenainya fall, rolled and burned. Fortunately, although Rimac Concept One was almost unrecognizable due to being consumed by fire, Hammond had crawled out of the car and was flown to the nearest hospital by helicopter. 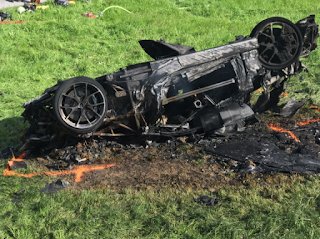 The Grand Tour team immediately visited him, including James May. Instantly, they uploaded a video containing Richard Hammond who was being hospitalized at St. Gallen, in which Hammond commented, "I'm not dead," aka, "I'm not dead." On the video, Hammond's left leg is shrouded in a gypsum and he thinks there's a crack in his knee and he's going to have an operation knee.

"I thank all the professional medical staff who brought me here using an air ambulance from the accident site to the hospital, including to everyone I've been dealing with," Hamster said. James May also joked with Hammond with a book whose title seemed to mock Hammond, whereas James himself had recently fallen from a horse and broke his back during Top Gear Patagonia.

This accident is known to be witnessed also by two other cars around the Rimac, namely Honda NSX and Lamborghini Aventador S. There is a footage when Jeremy Clarkson sits inside the Aventador, and if Hammond is in the Rimac, maybe the one who brought the NSX is James May. Quite a bit uncover what the Grand Tour content tomorrow, ie the fight between conventional supercar, hybrid and electric. 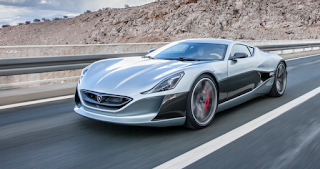 Rimac itself is a Croatian car that relies on electric power, namely a large chunk of battery packs and 4 electric motors for each wheel. This car could be FWD, RWD and even AWD only through the settings in the central interface that can be accessed by the driver. Run from 0-100 km / h can be less than 3 seconds, top speed almost 400 km / h and can beat Bugatti Veyron in drag racing 402 meters. Get Well Soon, Hamster! Hammond ran out of this incident so hatred Rimac not right?
Electric Car Richard HammondElectric SupercarNewsRimacRimac Concept OneThe Grand TourTop Gear
Comments