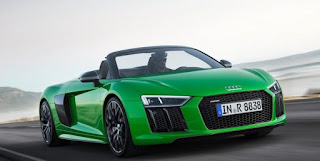 At the New York International Auto Show 2016, Audi introduced the new R8 with the V10 and V10 Plus variants only, but could immediately become a star in Marvel movie to accompany Iron Man a.k.a Tony Stark. But now the German company is not finished with the R8, because with the latest variant, the Audi R8 Spyder V10 Plus, R8 more complete range of special fried rice with egg omelet. 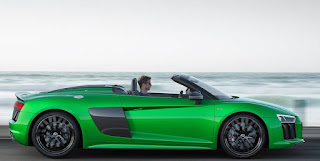 As the name suggests that contains the word 'Plus', R8 Spyder V10 Plus offers more performance when compared with the usual R8 V10 which is mostly on the machine. The engine used is a 5,200 cc naturally aspirated V10 that produces 601 hp and 560 Nm of torque delivered to 4 wheels via dual-clutch S-Tronic 7-speed transmission and Audi Quattro AWD system. 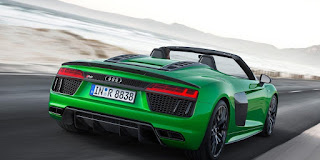 The entire configuration makes the R8 Spyder V10 plus accelerates from 0-100 km / h in 3.3 seconds, which makes the R8 V10 Plus 0.3 seconds faster than the non-Plus R8, and can reach a top speed of 328 km / h . Visually, the characteristic of R8 spyder is still maintained here, including its fabric roof. Lightly you know, weighing only 44 kg because it uses a lightweight material for the chassis. 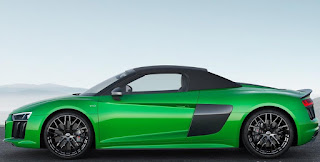 Thanks to its electrohydraulic drive, the roof can be opened or closed in just 20 seconds, and can be operated while running at speeds of 50 km / h. Same with its top hard version, the Spyder R8 spoiler is made of carbon-fiber reinforced polymer that replaces the dynamic spoiler that can go up and down. This model also has an exclusive green design package micrommata, where the car body is given a distinctive green color. 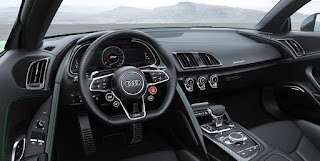 But still, customers can choose various options for the car later with Audi exclusive program, with many kinds of choices. Other equipment owned V10 plus is 19-inch alloy wheels with five-twin-spoke motif made from forged aluminum as standard, and 20 inch rim as optional. Then there is the Audi R8 bucket seats as standard, performance steering wheel, carbon ceramic brakes, Audi virtual cockpit, MMI navigation plus with MMI touch and Audi drive select. 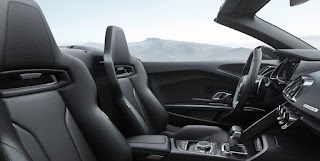