Najwa S. Sunday, June 11, 2017, June 11, 2017 EDT Last Updated 2017-06-12T03:04:18Z
Having shown the model before its facelift on GIIAS 2016 yesterday and we also had time to make a video review on the channel YouTube AutonetMagz, Wuling Motor Indonesia finally displays a preview version of their LMPV model which is scheduled to be introduced at GIIAS 2017 on 10-20 August. If in GIIAS 2016 Wuling MPV which is still named Hong Guang S1 is still using the steering wheel on the left, then in this preview version has been changed specifically for the homeland market, alias already get the birth certificate of Indonesia. 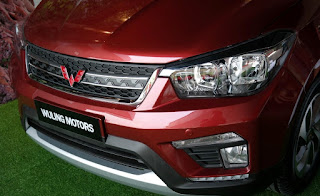 Not only change name from Hong Guang S1 to Confero S, steering wheel has been moved from left to right. Why change name to Confero? Because not all Indonesians can pronounce "Hong Guang" which if in Chinese the way of pronunciation is "Hung Kuang". So what is the detail and sense of driving this Wuling Confero S? Through a brief session some time ago, we had time to feel the latest LMPV Wuling Indonesia. Happy reading. 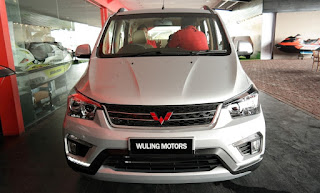 Wuling Confero S This is a facelift version of the model shown at GIIAS last year. Wuling chooses a tall and tall form of body, to offer an above-average space relief. It is true that the car is so much higher, but it does not diminish their intention to make it attractive. If you look at the exterior, immediately remembered Chevrolet Enjoy, but Confero S appear more modern, because it is equipped with projector lamps, sporty front bumper and LED DRL on the bottom of the bumper. 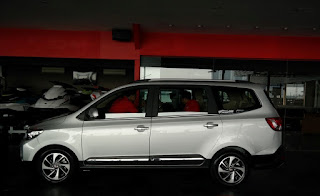 On the side, look high side profile, along with wide glass windows, apparently visibility will not be a problem in this car. The proportion of large body and glass that stretched wide make this car look like aquarium running. On the glass, equipped with chrome trim and other chrome accents on the bottom side of the door. 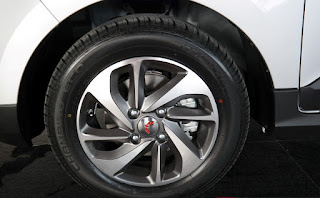 In the legs, alloy wheels have been using two-tone gray color and polished finish of the present and combined with tires measuring 195/60 R15, GT Radial Champiro Eco brand. Enough boost appearance hell, although we judge with the body profile is high enough, the tire so look too small. 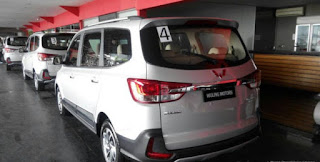 At the rear, the more visible body profile is high, because the large glass and rear door width dominate the design behind it. To add to the modern impression, Wuling chose to use a black crossover-style accent on the bottom, with a reflector that integrates with a boomerang-shaped LED fog lamp.

Now we go into the interior, and honestly with a high profile roof, direct effect on the relief of his cabin, because, we dare say that the relief space Wuling Confero S far left his rivals in the same class. If you think cars like Avanza and Ertiga are relieved, Confero can make the 2nd car room look ordinary. 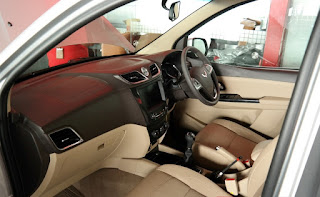 We get into the front cabin, the front cabin looks modern with a dashboard and doortrim design that tends to moderate. Fit & finishing pretty good, but do not expect any soft-soft or soft material yes, because the dashboard is dominated by hard plastic. 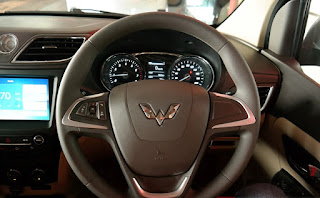 Stir Wuling Confero S itself can be arranged tilt, as well as a chair that can be up and down, and the leather upholstery on the entire line. Audio controls, and access to the phone are also embedded on the steering wheel. A little mumble, steering wheel design and the buttons are likely to belong to Chevrolet / GM, because the design is similar. Yes, suppose Chevrolet with the typical Chinese herbs that try to sell here. 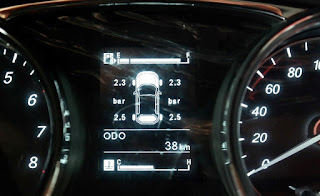 If you look at the speedometer, you can see monochrome MID display that displays a lot of info, such as odometer, engine temperature, fuel and TPMS (Tire Pressure Monitoring System). Yep, this is the first LMPV in Indonesia equipped with tire pressure monitoring system even if the font and its icon are not "mevvah", but its effort must be in appreciation and enough make this car like luxury car. 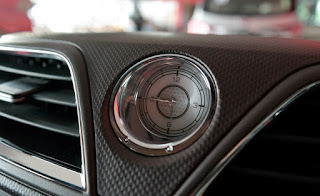 Other details appear on the analog clock of the European car at the top of the dashboard, and the touch screen head unit display that can play music, video, via USB, AUX, SD card, or mirroring with a smartphone. Standard home look like start menu from Windows 8, but there are some themes if you want another view. Below the screen, manual AC setting knobs and ventilation using a swivel model, but fortunately not shaped like a gas stove knob. 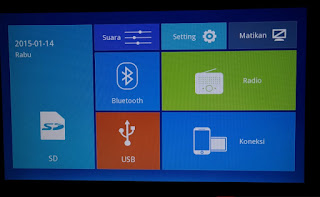 Another unique feature is seen in two slots beside 12V AC socket, where we can find USB and HDMI port to do the mirroring between our gadgets with head unit from Wuling Confero S, so just buy the cable just for mirroring. 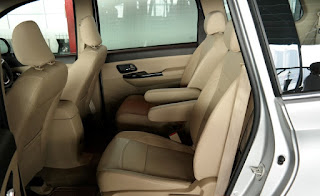 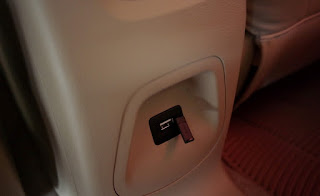 For rear passenger comfort, AC doble blower has also been pinned, along with the large-size setting of the blowing force on the roof. The USB port sits nicely in the center of the front, so to recharge the gadget's power can be done at all 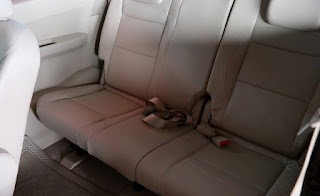 Surprisingly the third row bench is quite comfortable and spacious, so 3 people (2 adults and 1 child) can sit comfortably enough. Once again, the extent exceeds our usual expectations of sitting in the Low MPV branded Japan. The seat can also be folded with a 50:50 configuration towards the front. 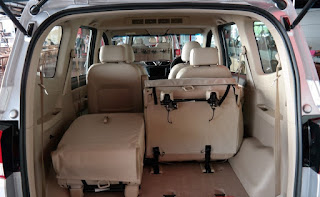 For baggage, if in the condition of third row seats stand, the luggage itself is quite spacious, very practical for daily needs. If you need more space, just fold the chairs that are in the back. 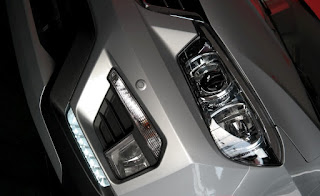 Safety or security issues, Wuling Confero S dare to pitted, because as a standard, this car is equipped with 2 airbags on the front, disc brakes on all wheels plus ABS plus EBD, parking sensors 4 dots behind, 2 dots in front, Immobilizer and Alarm, also Auto Unlock Collision which will automatically open all the door locks when impact occurs. 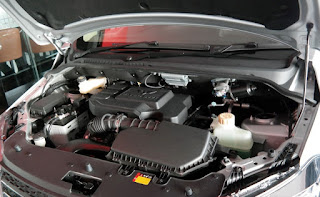 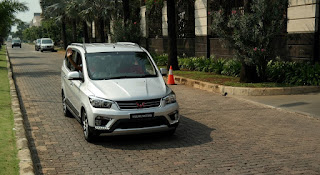 Trying to test drive Wuling Confero S this time was done on a short walk around the Pearl Beach housing area, so there really is not much to dig, but the first time we felt was a fairly high sitting position, with excellent visibility in its class thanks to the vast glass. However, the nose of the car is not visible, and the steering wheel is very light. 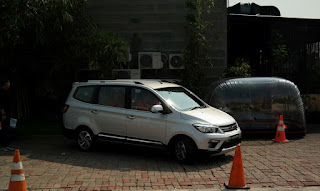 The clutch is also light and the gearshift is still quite fitting, the car runs easily when the gas is stepped on, but feels the character of petrol engine 1500 cc 4-cylinder P-TEC is like diesel, rich torque at low rpm but with short breath. Perhaps Wuling Indonesia needs to reset the character of this machine so its maximum torque range can be more felt not only in lap down, but also medium. Round up? Not mandatory, who is willing to menggeber family car like this as crazy? 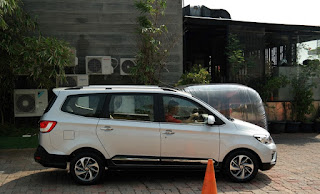 Wuling Motor Indonesia has not yet announced the price of Confero S, but some journalists propose that this car should be given a tag of the banderol in the range of 150 millions in order to have a high value for money. Please note, our Confero S is still a preview, so there may still be changes for the final version. Yes please, for now we can conclude that Wuling Confero S has more than enough capital to fight in LMPV class in Indonesia. 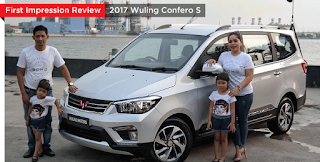 He has a spacious cabin, good quality artificial, features that are complete in its class, and if labeled with the right price, and supported by a good service network, this car could steal the attention of Indonesian automotive enthusiasts. 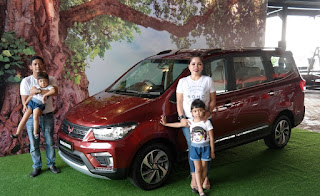 But of course Wuling needs to think about some of the homework for these models, such as distributing dealers and services, good branding, and financing institutions that support the sale of this new model. Undoubtedly, if all is well executed, the "Chinese car" image that has always been avoided because of its severe quality can be lost thanks to this new contestant.

So let's wait for the debut of Wuling Confero S and other variants on GIIAS 2017 August, but if you are really curious about the details of Confero S, please visit the 2017 Jakarta Fair which is currently underway, because there Wuling will show off Confero S for public.
CarCar of ChinaConfero SSGMWsgmw indonesiaWulingwuling confero sWuling Confero S 2017 Prototypewuling hong guangWuling Indonesiawuling motors
Comments