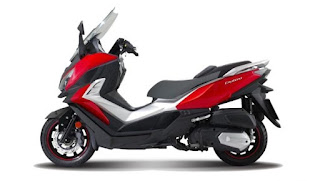 The market of scooter matic with large cubications seems to be the target of some manufacturers. We know that Yamaha is the first Japanese manufacturer to glance at this market, where Taiwanese competitors who have made annual products in this segment did not remain silent with the presence of Yamaha in their market.

Previously we already know that Kymco make their comeback in the market homeland with their debut at the Indonesia International Motor Show 2017 which took place since late last April. Their presence immediately disturb Yamaha X-Max is also a moment of introduction of the price is done in IIMS 2017 ago. And now, the old brother of Kymco San Yang Motor under the banner of PT MForce Indonesia officially challenged Yamaha X-Max 250, Kymco Downtown 250i, Benelli Zaferano, and Suzuki Burgman with their new product is SYM Cruisym 300i. 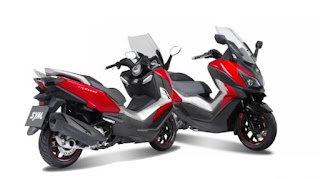 SYM Cruisym 300i launched with a price that is more expensive than its competitors, where this bongsor motor should spend your money as deep as 78.8 million rupiah. The price is high enough for motorcycles in the homeland market. However, the MForce Indonesia claims that the SYM Cruisym 300i has the toughness of a large skutik style motor-style adventurer. Skutik bongsor is given some detail features of the kind of LED lights on the back, LCD instrument panel, dual headlight, and also attractive newfanges. Although if we see the headlamps so come to mind the old Yamaha X-Max 250 model, but of course it's just a coincidence and a mere point of view.

Turning to the performance side, as one of the positive impact of larger cubic of its competitors, then the power from SYM Cruisym 300i was also become the largest among the others that is in the numbers 26.9 hp and 27.3 Nm of torque. The figure clearly leaves the Yamaha X-Max which only powered 22.5 hp and 24.3 Nm of torque, but worth remembering, SYM Cruisym 300i does have a larger cc 50 cc. But the negative impact of course is on the price and taxes that make this bike so expensive. 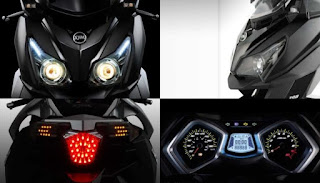 For the baggage business, in fact we do not need to discuss it, because the motor class is certainly has a large trunk bin of relief. Where SYM Indonesia claims that the luggage SYM Cruisym 300i able to accommodate two full face helmets at once, record ya full face not half face. With the advantages offered, MForce Indonesia certainly quite confident with the presence of SYM Cruisym 300i as the largest cubic player. And although different cubic, but of course still this bike interesting to be juxtaposed with Yamaha X-Max 250 which is ngehits right.

Guys, in SYM's own global website there are actually variants SYM Cruisym 250i lho, why not just this model is included? What if you think?