A car that became the backbone of Volkswagen Indonesia today is a small hatchback, the VW Polo MkV. Not one of these cars to be the backbone of VW here, because the price of the German product assemblies of India is quite friendly and not far from competitors from Japan. Yep, at a price of about 200 millions (or perhaps nearly 300 millions) can already subcompact branded German hatchback you know. Polo rivals are quite heavy here is the Ford Fiesta, which incidentally the design of Ford UK. 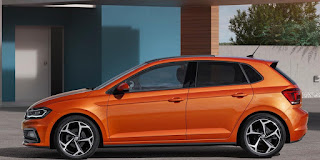 Do not believe? Preview deh look. At first glance, Volkswagen Polo MkVI face so similar to his brother, and we like the beautiful detail of LED DRL that connects with chrome lines on the grille. That Bumper also become more assertive and not memorable tacky at all. Options rim vary, depending on the variant, ranging from 14 inches to 18 inches, and for some types are already dual tone. Variants vary, ranging from Polo TSI cheapest for the proletariat to Polo GTI most expensive for the oil king.

Exterior affairs, we believe most will agree that the overall appearance of this car is better than the existing Polo. Okay, but honestly, the outside is nothing compared to the inside. VW Polo MkVI applicants will be more comfortable than in the old Polo, thanks to the new interior design is more fresh, sweet and pinned various kinds of details that have a hi-tech impression. 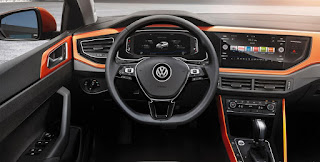 The earliest to be felt by the driver is the full-LCD instrument panel, similar to the Renault Koleos, the BMW 740Li, the Mercedes E-Class and the S-Class as well as the Audi cars. Integrated with various info from head unit of kind of navigation and all kinds. If in Audi called Virtual Cockpit, in VW name Active Info Display. Duh, hopefully this one passes to the Indonesian market. 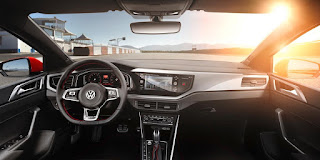 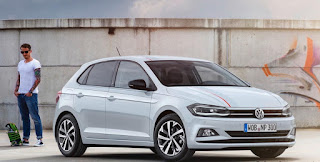 If there is more pocket, VW Polo MkVI can be added with Active Cruise Control, Blind Spot Detection with Rear Traffic Alert and Park Assist. Specifically wearing DSG gearboxes, Active Cruise Control installation includes the "Stop & Go" function to smooth the pace of this car in the middle of the congestion. This is quite interesting, because if anyone has ever felt a double clutch gearbox in the Fiesta, Ecosport or Golf MkVI, the sense of shake when the stuck is tiring. 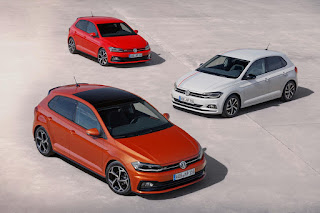 By the way gearboxes, yes, VW Polo MkVI is installed with DSG dual clutch gearbox or conventional manual. Affairs of the engine, there is a 1000 cc 3 cylinder turbo TSI with 2 power options, 65 PS or 115 PS. Increased slightly, there is an optional 1,500 cc 4 cylinder turbo TSI Evo with cylinder deactivation system, where some pistons can die in certain situations to save gasoline. Oh yes, it's 150 PS. 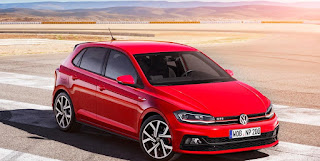 When all these machines are not enough, see VW Polo GTI. This small hot hatchback uses a 2,000 cc 4-cylinder turbo TSI engine with 200 hp power, and can go from 0-100 km / h in 6.7 seconds. Okay, but what about the environmentalists? For them, VW created a machine with natural gas fuel with a capacity of 1,000 cc 3-cylinder turbo, named TGI. Strength is only 90 PS, but anyway this machine is environmentally friendly. Good thing is not diesel yes.

According to the agenda that has been prepared for the original continent, VW Polo MkVI will Where to go to several key markets in Europe, then stop by the Frankfurt Motor Show in September. Prices in Germany claimed about 13,000 Euro, aka about 200 million Rupiah less. Well, it seems to stay wait whether the Polo is increasingly now ready to enliven the hatchback class here.
CarPolo GTIVolkswagenVolkswagen IndonesiaVolkswagen PoloVolkswagen Polo MKVIVWVW IndonesiaVW PoloVW Polo MKVI
Comments