Car Manufacturers and Giant IT Companies Fight in Frankfurt -->

Car Manufacturers and Giant IT Companies Fight in Frankfurt 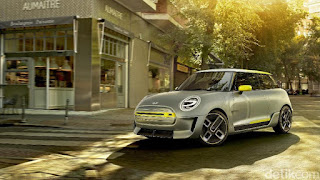 MINI electric car one that will be shown at the Frankfurt Motor Show 2017 (Photo: MINI)

Frankfurt - The automotive world is undergoing major changes in recent years. The challenge is enormous with the addition of new competitors from the world information technology giant.

This is evident from the exhibition Frankfurt Motor Show which will begin to open to the public on September 14 to September 24, 2017. There the car manufacturers face new players in the world of mobility.

"The main focus of the exhibition is digitalization, the car in the future will be connected and automatic," said President of the German Automotive Industry Association (VDA) Matthias Wissmann as reported by detikOto Dadan Kuswaraharja from Frankfurt, Germany, Monday (11/09/2017).

IT giants who entered the Frankfurt Motor Show or the official name of IAA (Internationale Automobil Ausstellung) will be attended by IT giants like Facebook, Google, Qualcomm, BlaBlaCar, Harman, IBM, International Industries, Kaspersky, Merck, NXP, Siemens, Sony, TomTom, Telekom, Allianz and McKinsey. There are also companies like Moovel, MyTaxi, Car2Go, and Moia.

"All this indicates that technology and IT companies are now using IAA as a platform, the IAA being a meeting place between IT players and car manufacturers," he said.

The exhibition was attended by 1,000 participants coming from different parts of the world as well from Asia as China. A total of 50 registered brands, brands from Europe, America and Asia. The McLaren sports car will return to the IAA after being absent for several years. Chery from China is coming for the first time.
2017 Frankfurt Motor ShowCar Manufacturers ListFrankfurtFrankfurt Motor ShowNewsThe FightTop Car Manufacturers
Comments