Google Past, Current, Still so -->

Google Past, Current, Still so 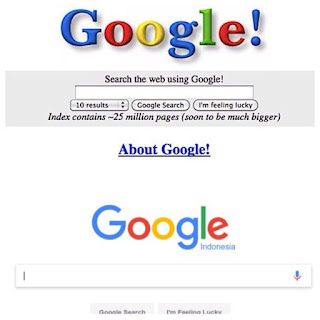 In the digital era like today, the existence of Google as a search engine on the internet is no doubt. But who would have thought the form of Google from the first time born, not too much alias change so-so only.

Google itself just entering the age of 19 years on September 4 yesterday. Founded by Larry Page and Sergey Brin while still a student at Stanford University. At that time, this duo created Google as a container of world information and accessible to everyone.

However, Google did not launch their search site until a year later. Quoted from Business Insider, Monday (18/09/2017), on September 27, 1998 is the birthday of Google actually.

The achievement was celebrated by Google in their Twitter account. In the form of animation, mark 20 years old this is marked by amount hurus 'o' which reach 20.

"Happy domain-iversary! Celebrating 20 years since we registered Google.com with many o its," twit Google.

Switch to the first time Google appeared, 19 years ago. The design of this Google page has not changed much. From the beginning until now, the company based in Mountain View, United States, is still carrying the same color in each letter, namely blue, red, yellow, blue, green, red.

The only visible difference is the user exclamation point, when Google first existed in cyberspace, where Google now does not use it. In addition, the retro search page view is now changed more simply.

Transformation also occurs on the Google business side. This company not only rely on revenue as an internet search engine but has penetrated into various lines. Call it the cloud, fiber optics, video sites, software, smartphones and digital advertising that is the largest source of income.
Design of GoogleDigital AdvertisingDigital EraDomain NameExistence of GoogleGoogleGoogle.comHappy domain-iversaryInformationInternetLarry PageSearch EngineSergey Brin
Comments