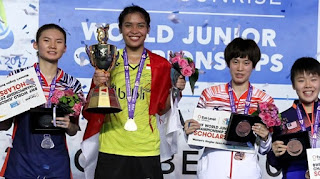 Yogyakarta - Gregoria Mariska Tunjung presents the women's singles title for Badminton society in the country after the final Blibli.com Yonex Sunrise BWF World Junior Championships 2017 beat Chinese victor Han Yue 21-13, 13-21 and 24-22 in GOR Among Rogo Yogyakarta, Sunday (22/10/2017).
After the game, Gregoria Mariska Tunjung admitted Han Yue in the first set carried by the rhythm of his game.
"In the first set I performed the most, even Han Yue carried by my rhythm game," he said.

Entering the second set Gregoria admitted himself that the turn could not develop the game.
"In the second set I was confused to appear inconsistent so lost," he said Grego who has packed three wins from Han Yue without defeat before.

In the third set Gregoria game could make the audience anxious, Han Yue so dominant.
But thanks to a performance that does not easily give up, Gregoria impose his ability to counterbalance Han Yue game.
"It's the responsibility, the period in the third set I have to give up, so I look concentrated, let alone play in front of the public itself and finally can finish the third set," he explained.
Meanwhile, Han Yue himself admitted if Gregoria's game is so good that it made him give up three sets.
"Gregoria played well, let alone got the full support of the audience," he joked.
With his victory, Gregoria admitted his journey in the arena badminton has not been completed.
"I have to prepare myself to perform at senior level, so this world championship is the last one for me, then I have to concentrate again to perform at senior level," he joked.
BadmintonBlibliBWF World Junior Championships 2017GOR Among Rogo YogyakartaGregoria MariskaGregoria Mariska TunjungOther SportsReal Madrid vs EibarSportWinner
Comments