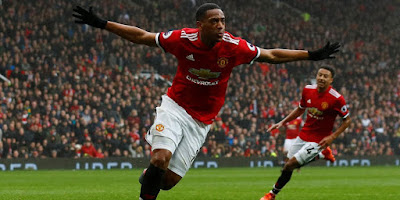 Appear in front of their own supporters, Manchester United appear to attack since the beginning of the game. In the first 15 minutes they dominated the course of action and Romelu Lukaku combination, Marcus Rashford and Henrikh Mkhitaryan often make Tottenham defender hassles.

MU's first golden opportunity was born in the 12th minute. It was Marcus Rashford who forced Hugo Lloris to a brilliant save to thwart his free kick.

After 15 minutes Tottenham began to find their rhythm game. They managed to get out of the cage MU players and managed to beat back the MU players to survive in their own defense area, but their efforts are always thwarted by discipline MU defender.

With a tough defense of the host, Spurs try their luck through long-range shot through Moussa Sissoko and Toby Alderweireld. But both shots are still far from the word danger.

The tension of the game at Old Trafford had heated up in the 30th minute, where Ashley Young was involved in a feud with Moussa Sissoko who later widened into feuding Romelu Lukaku and Dele Alli. But the referee quickly reacted and broke the argument.

Tottenham dangerous chances in the first round was born in minute 42. Starting from a corner kick scheme, Eric Dier fired a volley but unfortunately the shot was so weak that it can be caught by De Gea. 0-0 score lasted until halftime.

Entering the second half of the tempo the game was running. Sale and purchase attacks continue to occur despite not as fast and seintens in the first round.

Manchester United get two golden chances after 10 minutes of action at Old Trafford. The first chance was born from Ashley Young's pulling pass that led to Marcus Rashford but the ball could still be swept by Davies. One minute United again threatened with the same pattern, this time Romelu Lukaku failed to take advantage of these opportunities.

MU again got a golden opportunity in 64 through Antonio Valencia volley, but the hard kick was still bounced thin over the goalkeeper Lloris.

Equally stagnant, both coaches make a turn in this second round. Pochettino pulls out Son Heung-Min and Moussa Sissoko to be replaced with Fernando Llorente and Moussa Dembele. In the camp host Jose Mourinho pulled out Henrikh Mkhitaryan and Marcus Rashford to be replaced by Jesse Lingard and Anthony Martial.

The inclusion of both players in the camp of Manchester United makes the red devils more aggressive in attacking. In 73 minutes Manchester United got a golden opportunity after Romelu Lukaku escaped from having the Spurs defender, but his kick from the left side can still be ignored Lloris.

Goal of the long-awaited host finally born in minute 81. Starting from feedback Romelu Lukaku header, Anthony Martial successfully escaped from the guard defender Spurs and menceploskan ball in a one-on-one position against Lloris. Score changed to 1-0 for home advantage.

Coming to the game after the Red Devils again got a golden opportunity after Jesse Lingard got away from the offside trap. But unfortunately he was not calm enough so that his kick soared above the goalkeeper Lloris. The 1-0 score remained until referee John Moss blew his long whistle to the end of the game.

This defeat adds a long record of bad Tottenham who have not won at Old Trafford since 2014 ago. This victory makes United survive in second place, but they successfully widen the distance from Tottenham who is ranked third.