Round I, ManUtd vs Benfica play Goalless Counter -->

Round I, ManUtd vs Benfica play Goalless Counter 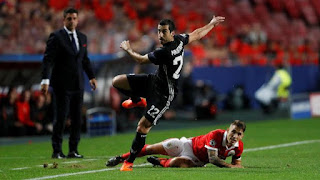 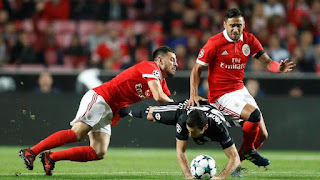 Since the beginning of the game, Manchester United continue to be pressed Benfica who play aggressively. The Red Devils seemed to focus more on strengthening the defense by relying on counterattacks.

Benfica opened the first chance in the 14th minute. Attack from the left side, Grimaldo sent a low cross into the penalty box and greeted Eduardo Salvio's kick, but the ball was still wide of De Gea's goal.

Manchester United only rely on counterattack against the onslaught of Benfica.
(Reuters / Carl Recine)
Jose Mourinho's lead squad began to develop the game midway through the first half. Red Devils even almost scored into the goal Benfica.

Romelu Lukaku's header in the 17th minute just hit the crossbar Benfica after receiving a corner kick from Marcus Rashford.

Manchester United often provide direct feedback from the back line forwards to counterattack. However, Benfica is still able to prevent it with the offside trap that so far works effectively.

Benfica also got a golden opportunity when the ball kick Benfica players had about Ander Herrera. However, if it is dammed player ManUtd.

Antonio Valencia made a careless act by menyikuy Benfica player, Raul Jimenez in the 41st minute. The referee immediately gave him a yellow card.

The match looked pretty monotonous because the Red Devils waited too much for the Benfica attack and relied on counterattacks.

Several times the players of the Red Devils are so easily trapped offside. One of them is Daley Bind who received feedback directly from behind.

The first round match was ended with a score without a goal.