If there is a car capable of being an opponent of Toyota Sienta in Indonesia, the car is none other than Honda Freed. Freed ever sold in Indonesia used to swing freely without an opponent who really class and worth it, but now the wheel has spun. Now, it is Toyota Sienta's turn to roam the streets of Indonesia with no rivals that could disturb his existence.

Unfortunately, Honda Prospect Motor has not been interested in entering the second generation Honda Freed into the ranks of its model in Indonesia. Luckily, the time to travel to Motegi yesterday there is a second generation Honda Freed ready to be tested and explored inside. No half-hearted, because provided is Freed Hybrid. There's actually a Fit Hybrid and a Hybrid Odyssey too, but Freed is more interesting to us.

So, what's the news of this new generation? Consider the First Impression Review of Honda Freed Hybrid 2017 JDM-Spec with updetails.com.

The basic shape of Honda Freed is still the same: Box. But if you think Honda Freed is old enough box, this is more box again. Whether because of ambience or something, this second-generation Freed looks more "Japanese" than the first generation. Toyota Sienta actually also looks "JDM" really like Freed, it's just a different design approach. Sienta is more quirky and brave, while Freed is more calm and simple. 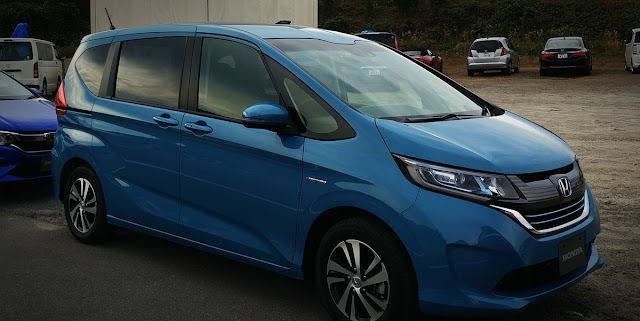 This is good, because it can accommodate different tastes. For those who want to look unique can lyrics Sienta, and for those who want a design that is not weird may be interested in Freed. Back to Freed, his face still rely on the Soild Wing Face is so typical of today's Honda, equipped with a grille made of shiny plastic panels with contours that give the effect of stripes. Well, lest it would appear the title "Car masher" deh make this car. 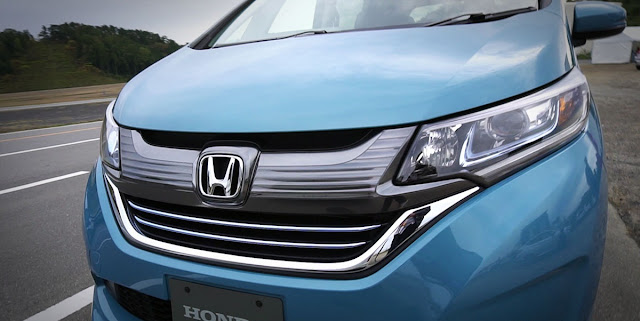 Honda Freed Hybrid headlights have been LED projector, but unfortunately not as cool as CR-V, Civic, Jazz or Accord lights that have adopted the Acura lamp style. Below his grill stripe, it features chrome blades. The car we tried has no fog lights, whether sold as optional or new in the higher type again. Freed front bumper is clean, no front parking sensor here. 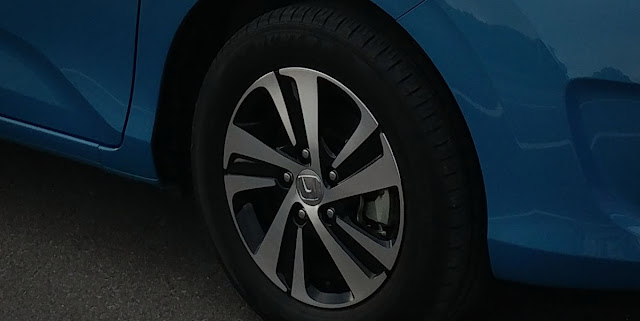 Unit Honda Freed Hybrid which is already wearing two tone rim, okay okay for improving appearance. Differences with Toyota who want to give a special logo with blue luminescence for hybrid variants, Honda do not bother. There is no different "H" logo between regular Freed and Freed Hybrid, only distinguished via "Hybrid" emblems on the side and back. Features such as keyless entry and power sliding door must be standard. 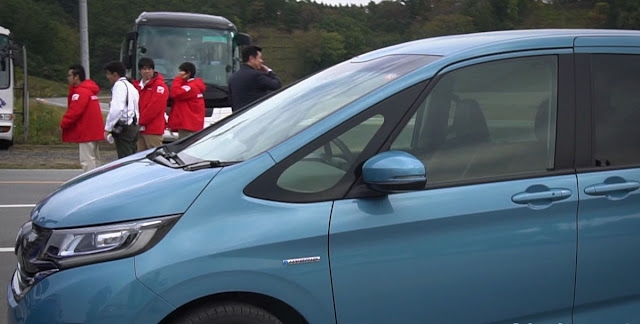 To outsmart the A pillar so as not to over-obstruct the view, the Honda Freed Hybrid has the same peeping glass as the old Freed on the A-pillar. This is a Freed Hybrid EX variant, but the Freed Hybrid has not been equipped with the Honda Sensing safety features according to the specifications on display at Motegi. The quality of the manufacture is good with the thickness of the fitting plate and the gap between the panels are consistent. 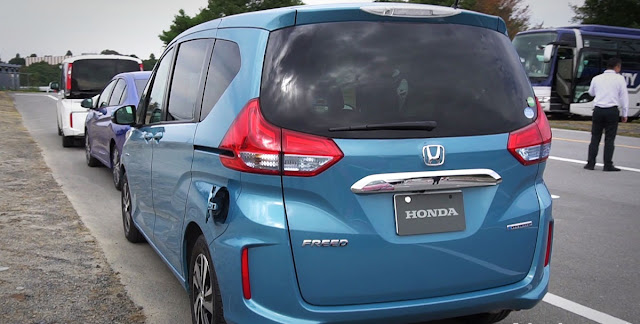 Rear front brakes are already discs, and there is definitely ABS and EBD. Going to the back, the shape of the box really even though there are several curves that are designed as a sweetener. The rear lights have a simple model and the chrome garnish on the trunk door is standard. Unfortunately, despite having a parking camera like the Civic Turbo, there is absolutely no parking sensor in this car. Do you have to persuade sales to be there anyway?

Honda tried to bring the concept of dashboard "Open Cafe" owned Honda Freed become more complex, and it can be seen in this Freed Hybrid. Unlike the simple old Freed, the new Freed dashboard looks like a legit layer cake because it's designed with a variety of panels with different colors. The instrument panel hat is brightly colored, the wood panel is dark brown and the bottom of the black plastic dashboard. 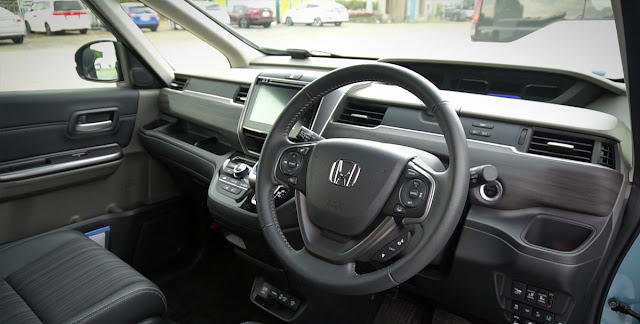 Interior work is good, because there is no panel that is tenuous or swayed like on Mobilio, Brio and BR-V. Sitting on the bench driver, the contour of the seat feels less supportive despite the driving position ergonomics. Full seat settings ranging from back and forth, up and down to reclining though still manual, the steering wheel can also be set up and down or back and forth. Stitches in the seats and doortrim Freed is original, not fake like Vios, Yaris and Sienta. 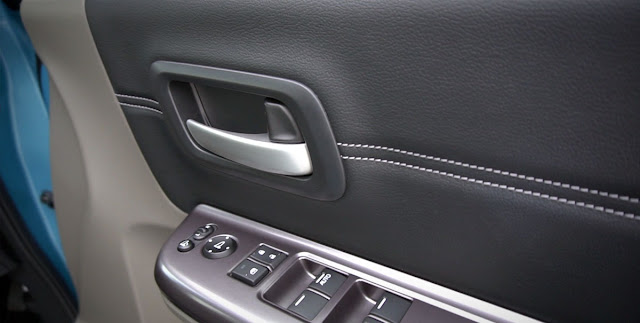 Honda Freed instrument panel now full digital, and the screen on the left apparently not a mere tachometer. Through the existing button, we can see other info such as compass and how this Freed hybrid system works. Practicality, Freed can be relied upon by the number of pockets that have a decent size. Even in front of the driver there is a handy little drawer for storing some of the keys like car keys and electronic money cards. Unfortunately, Freed's main glove box is not a soft opening so it seems cheap and rough. 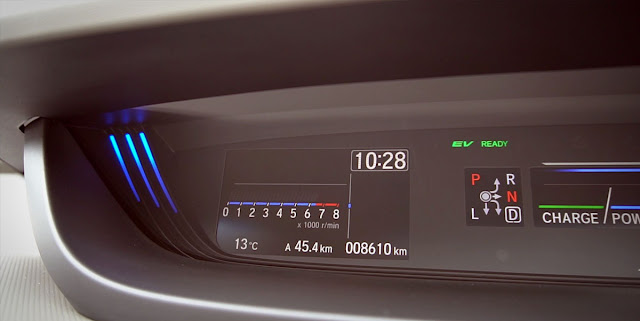 Because Honda Freed head unit is still Japanese and because we can only read Katakana and Hiragana, we skip because our knowledge of Japanese Kanji is still low. Honda Freed already has a digital AC with auto climate control with a combination of regular buttons and swivel knob. Honda Freed Hybrid has no AC double blower, but he already has a seat with a heater. If in Indonesia, what happened may be the opposite, there is double blower air conditioning but heated seats are lost. It suits hell, hot Jakarta you know. 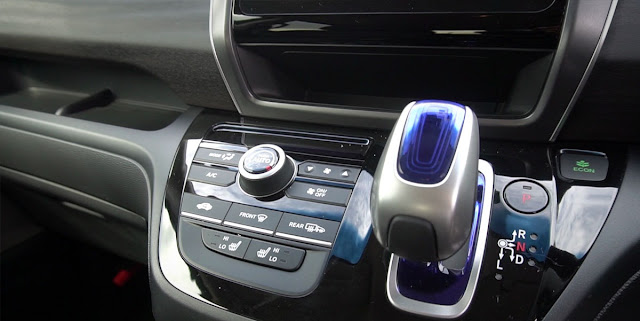 The Honda Freed Hybrid is funny in its operation, like a toy. To go to P, just push the P button, but to go to R, N, D or L stay move in the direction you want. Like the second-generation Toyota Prius and Audi, when it was moved he will not sit in the position that we have directed, but immediately back to the original position even though it has entered the teeth. Think of it as an arcade gaming gear at a game center in a mall. 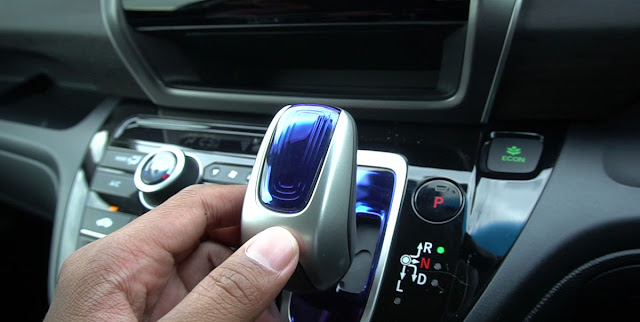 But make no mistake, funny like this sturdy gearbox spec for a family MPV, which is 7 speed double clutch. Here's Honda, hybrid cars wear double clutch while turbo cars use CVT. Well, hopefully the prototype Civic Turbo double clutch gearbox can provide change. At the bottom of the gear, there is an HDMI port and 2 charger ports, and the type of parking brake is a stampede model like the KIA Grand Sedona.


As a driver, we will find many buttons on the lower right side of our sitting position. In addition to the buttons for sliding doors, there are also buttons for pre-collision warning, autonomus braking, lane departure warning, stability control and others. There is a funny in the wheel, because in addition to the buttons for audio, phone and adaptive cruise control, the button to enable the cruise control itself instead written "Main". Strange, normally it is "Cruise". 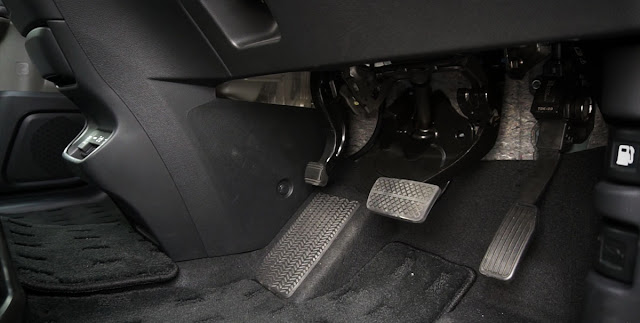 Honda Freed Hybrid second row space that we try has fitted captain seat, or if the language of Honda "King & Queen Seat". With the sliding distance of the middle seat up to 120 mm, this seat is very flexible although can not be shift left-right. To be occupied was comfortable and the room was relieved, both legroom and headroom when inhabited by adults 178 cm tall. 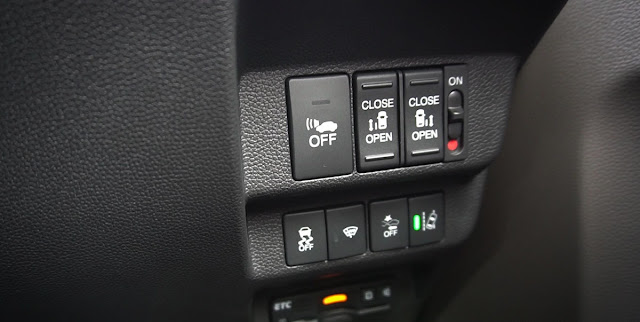 But as usual MPV size as high as with Freed and Sienta, behind the cabin too passed for adults but suitable for small children. The headroom remains small and the legroom will stall if the second row passenger is selfish already acute level. Freed Luggage has sufficient capacity, able to accommodate some backpack or travel bag. The folding seat is similar to Kijang Innova, which is folded to the side. 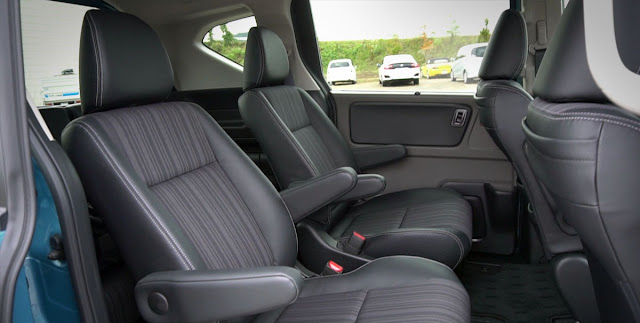 Is a 1,500 cc 4-cylinder i-VTEC engine plus the help of batteries and electric motors that became the heart of the Honda Freed Hybrid. For gasoline engine, 110 PS power and torque of 134 Nm, but remember that he assisted a powerful 22 PS electric motor and 160 Nm of torque. Delight, 160 Nm of torque was ready since the car was stationary and continue to exist up to 1313 rpm, just after the turn of the gasoline engine that show off. 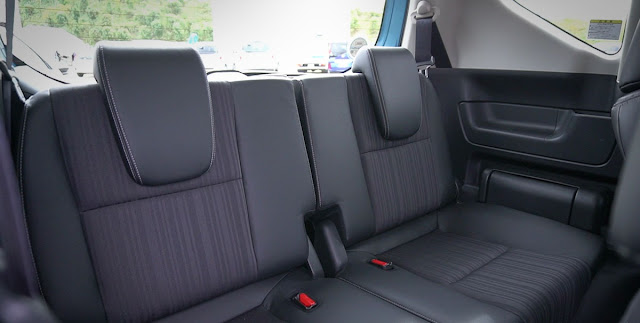 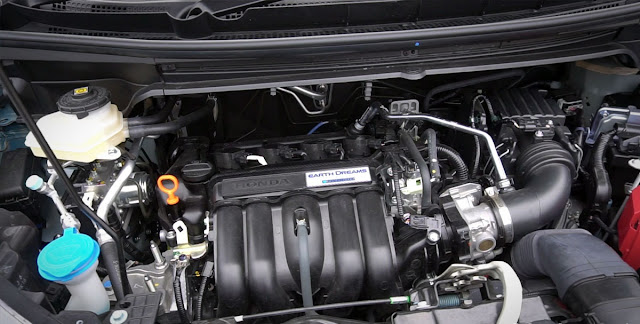 We took the time to try this car for a while. When turned on, there is no vibration or sound of a live gasoline engine, only lights read "EV Ready" on the instrument panel. Go to D and start walking, the car is still quiet because the electric motor is running the car. It was only when kickdown, gasoline engine began to activate and run the car with the transition of the switch to the gasoline engine is smooth and minimal interruptions. Transmission is also good, moved his teeth quickly and did not ndut-ndutan when the street smoothly. When it crashes? I have no idea. 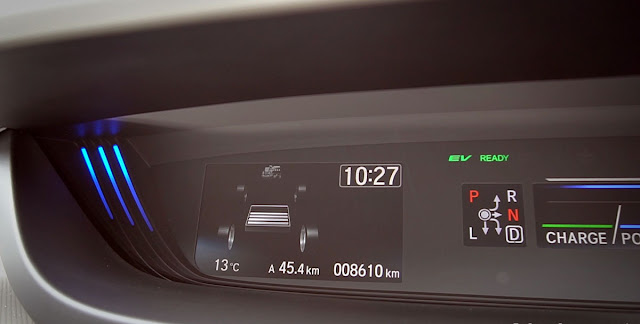 Honda Freed steering is not so lightly, but still weight. Tend to be relaxed and unresponsive, feedback was not too noticeable. Regarding performance, soundproofing and damping, we can not comment much because the area we passed is super smooth, controlled and quiet, especially our speed is limited to 50 or 60 km / hour. But when turning back, the wheel is broken enough and the radius of the swivel is very small and easy. 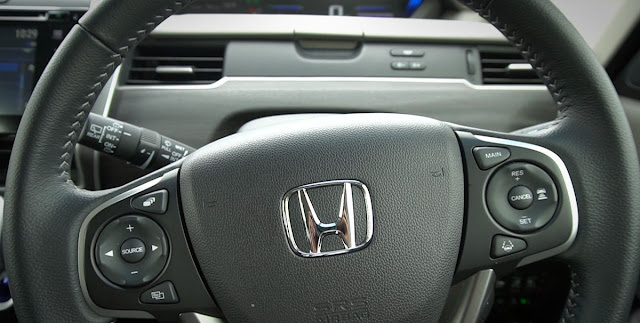 When the gasoline engine is active, it will sometimes play a role as a generator and provide electricity for the battery, but when we gaspol out, direct gasoline engine does not act as a genset and full drive the front wheel as much as he can. When we release the gas, slide and brake, the energy created will be channeled to recharge the battery that is behind the car. This is not a plug-in hybrid, so there is no charger port to be plugged in the wall of the house via a socket. 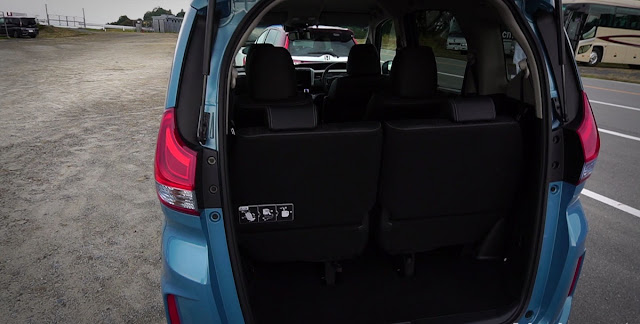 A short enough time to try Freed, and we're actually still not satisfied. The new Honda Freed is trying to spoil those who are concerned about comfort, visible from the cabin is more relieved accompanied by a smooth and silent hybrid engine. Its safety features are complete (knowing, Japanese specs), the look feels Japanese though it tends to be conservative compared to its quirky rivals. 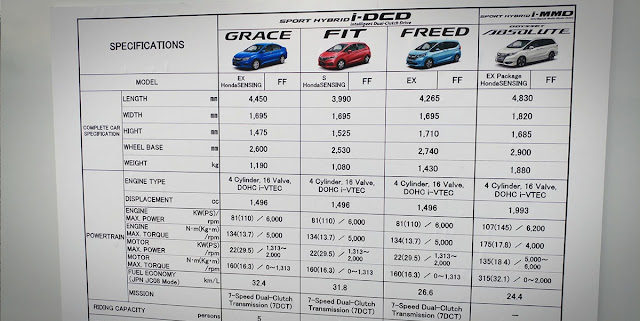 But for those who are looking for the fun of driving, Freed does not seem like a wise choice. Although steering wheel still has a little added to the sense of steady, he still not so evocative. Contour seats can be better again, but it seems all that is quite minor compared to the smoothness and ease offered. If there is a chance at another time, we want to discuss the Freed's finished completely. 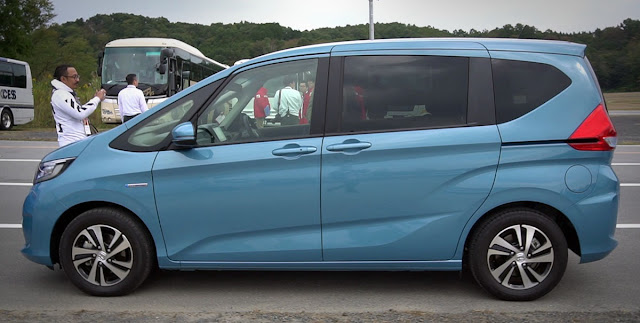 Unfortunately, Honda Prospect Motor has not stated whether they want to import Freed to Indonesia or not. If the answer is no, then the fate of Freed will be the same as Honda Stream whose next generation is not imported here. But just hope, because while want to change the year to 2018, Honda iya Indonesia did not have a new car for sale. What's your opinion? Convey in the comment field!

To make it clear, we created a new Honda Freed first drive video, which can be played at the top of this article
CarCar ReviewGPHondaHonda FreedHonda Freed 2018Honda Freed HybridHonda IndonesiaHonda JapanHonda Prospect MotorMotegi
Comments

Thank you for helping people get the information they need. Great stuff as usual. Keep up the great work!!! guided motorcycle tours