Net Neutrality - All the things you need to know -->

Net Neutrality - All the things you need to know 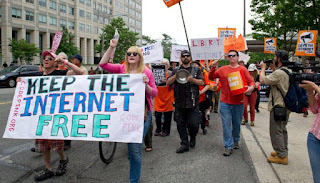 Have you ever heard the term Net Neutrality? But still confused and less understood? This time Tech in Asia has summarized everything you need to know about Net Neutrality.

What is Net Neutrality

Must Read : Google Past, Current, Still so

Net Neutrality is a principle whereby Internet service providers (ISPs) such as Telkom, Indosat, Biznet Network, or XL Axiata must be fair to all internet content providers (sites) and do not restrict the access rights of customers. This means content from all content providers can be accessed with the same speed and transmission quality.

The Origin of Net Neutrality


The term Net Neutrality originally came from Tim Wu's thesis, a Columbia University professor who discusses broadband discrimination. One example of a phenomenal case of Net Neutrality infringement occurred in the United States in 2008 when the largest Internet service provider in the United States, Comcast, reduced the speed of their customers who download files using Bittorrent software. The case continued to roll until in 2009, Comcast admitted that it had made a mistake and stopped it in 2011.

A similar case also happened to the leading streaming film rental service provider in the United States, Netflix, who found that customers' internet access to their path was being trimmed by Comcast because it was considered wasteful of data. This makes Netflix customers can not enjoy streaming movies with high quality (HD). The case ends with an agreement whereby Netflix has to pay an additional fee to Comcast to get fast and stable internet access.

How does Net Neutrality work?

Must Read : Want to be HACKER Pro? This is Science That Must Be First You Learned


I'll explain with an example of how Net Neutrality works. So if you access the Netflix site, then the video will be delivered in the form of data packets to the user and assume there are 10 packages that Netflix sends to the user. At the same time, let's say you're also accessing videos from YouTube, so YouTube also sends 10 packets to users.

From here, the ISP serves as an introduction to the packages. With Net Neutrality, packages from Netflix and YouTube will be delivered equitably with the same amount and time, so there's no break between videos from Netflix and YouTube. However, if Net Neutrality does not exist, for example Netflix pays Internet point to Comcast, then the packets submitted by Netflix will take precedence so that it gets to users faster and consequently the video from YouTube will be hampered.

So you can imagine what would happen if there is no Net Neutrality. Internet content providers who do not have a lot of budget should lose access because they do not pay for internet access to the ISP. On the other hand, netizens are also certainly harmed by the ISP's alignments.

What is the relationship between Net Neutrality and Indonesia

Some cases that are indirectly related to Net Neutrality violations in the country are when some mobile operators and ISPs intentionally insert advertisements without customer's knowledge and consent. It is arguably a hijacking of customer internet access. However, the customer can not do anything because it is the authority of the ISP as an internet service manager.

The legal rules of Net Neutrality

On April 13, the Federal Communication and Commission (FCC) officially rolled out a 60-day trial of Net Neutrality regulation in the United States. The regulation stipulates that ISPs in the United States such as AT & T, Verizon and Comcast are prohibited from restricting content, reducing internet speeds, and accepting bribes from Internet content providers to speed up access.