The news of Jonghyun SHINee's death has been a shocking news for everyone. Not only the family, the relatives, friends and fans of Jonghyun also sorrow to hear the news.

One of the figures who reportedly enough shock with news of Jonghyun's death is his fellow member SHINee, Minho. This is known through the presence of a number of fans who claimed to have seen Minho in the hospital.

See Also: Coco Film Show Mexican Culture about the Day of Warning to the Dead

As soon as the news of Jonghyun's death spread, the fans immediately came and gathered at Konkuk University hospital. When found unconscious in his room, Jonghyun was rushed to the hospital but his life could not be helped again.


According to the fans, Minho even fainted when he heard Jonghyun died. Based on the news circulating among fans, Minho was quite shocked when he learned of this news. 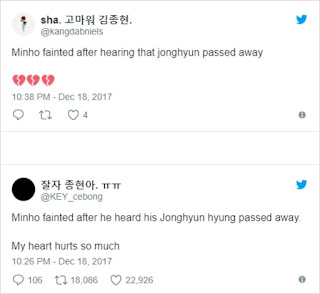 But it could be this news is just an issue circulating among fans because it has not been ascertained the truth. Moreover SM Entertainment also did not confirm any news other than justifying the death of Jonghyun.


SM did not even clarify the news about the cause of Jonghyun's alleged death due to suicide. "... We ask all of you not to make any rumors or assumptions based on the news out there in honor of his grieving family for this news ...," the SM Entertainment statement declared.