Alabama school closings will soon be easier to find -->

Alabama school closings will soon be easier to find

The Alabama State Department of Education will go live with a new online notification system on Feb. 1, according to Dr. Michael Sibley, Director of Communications for the department. Sibley shared the new system with the Alabama Board of Education at their work session on Jan. 11.

The new system, Sibley said, allows the media and the public to access "all the information together in one place at one time, so it won't be spotty reporting about what's open and what's closed statewide."

Local superintendents or their designee can enter the information into the state department's web site directly, Sibley said, to let the public know whether schools are delayed, closed, or even on lockdown.

Local school district officials will still make the decision on whether or not to close or dismiss early, and this doesn't replace any local notification systems that local officials have in place. It just makes it easier for parents and officials to find the information, Sibley said.

"What do we all do when we have weather coming in? We go to the local news station," Sibley said.

AL.com typically relies on direct notification from officials or notifications through official social media accounts, adding them as they are received.

The effort started over a year ago, Sibley said, and has been being tested since April of 2017. More than 100 systems have used the system to date, he said, and more than 20 events have been logged into the notification system.

Sibley said state lawmakers passed a law in 2017 requiring the development of a notification system like this, but the department had already been working on it. He said officials have shown the system to lawmakers, and the new system meets the requirements of the law.

The online system also gives school officials easy access to the form they need to complete to request an "excuse" from making up the missed school day, Sibley said. That excuse can be granted by the state superintendent when the Governor declares a state of emergency, as Gov. Kay Ivey has declared for the current winter weather event.

Here's what the system will look like when it goes live on Feb. 1. 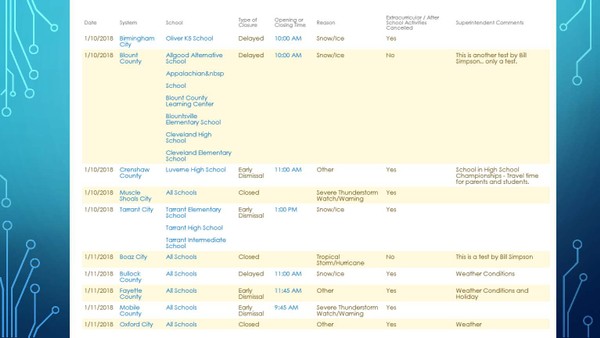