Najwa S. Sunday, January 14, 2018, January 14, 2018 EDT Last Updated 2018-01-15T03:47:51Z
The last time you could buy a new Ford Ranger was in 2011, and by then it was a tired platform dating back to 1983. It hadn't undergone a significant refresh since the early 1990s and dated back to a time when compact pickups were truly compact. It languished as a fleet vehicle in its final years, dwarfed as the competition grew in both size and sophistication. The sad Ranger was left behind. 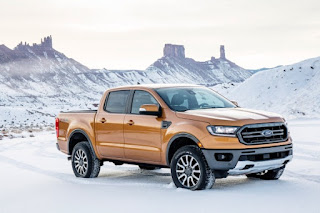 You can now scrub that image from your memory. The 2019 Ford Ranger will make its long-awaited return later this year. And from what we can see here at the 2018 Detroit Auto Show, it stands a good chance of reasserting itself as a serious player in the midsize truck segment.

Two things are apparent right away. The midsize 2019 Ford Ranger is recognizable as a Ranger, and it looks strikingly handsome. Available trim levels are the XL, XLT and Lariat. It's no surprise that rear-wheel-drive and part-time four-wheel-drive versions are available, and each can be configured with the corresponding FX2 or FX4 Off-Road package. You can choose a crew cab or an extended cab, but the regular cab that was once favored by your local cable company is not returning. 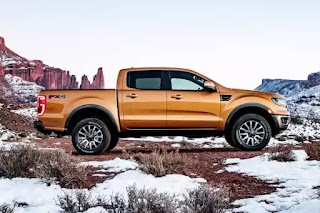 There is but one engine, but all indications suggest this won't be a problem: It's a 2.3-liter EcoBoost turbo four-cylinder with a stop-start system. Since the 2.7-liter EcoBoost V6 is such an overachiever in the larger Ford F-150, we like the notion of a 2.3-liter EcoBoost engine in the smaller Ranger. There's little doubt it will stack up well against the Toyota Tacoma's torque-deficient 3.5-liter V6, and it could also outperform the 3.6-liter V6 that powers the Chevrolet Colorado.

This competitive matchup is all the more likely because of the 2019 Ford Ranger's standard transmission, the very 10-speed automatic that is proving to be a fantastic smart-shifting piece in the full-size Ford F-150. We expect more of the same with the Ranger. The extra gears narrow the rpm jumps between shifts, so the ideal gear for the job should always be close at hand. It should totally kill off the potential for gear hunting on grades, something that plagues the Tacoma. The Ranger's high-numeric first gear suggests a very favorable low-range crawl ratio, while the highly overdriven upper ranges of ninth and 10th gears should do wonders for highway fuel economy, although those figures have yet to be released. Nevertheless, an announcement of class-leading efficiency wouldn't surprise us. Whether those fuel economy ratings will be easy to replicate in real-world driving is another matter. That's been a bugaboo that has haunted other EcoBoost powertrains, and in the case of the Ranger, we'll have to wait until it hits the streets. 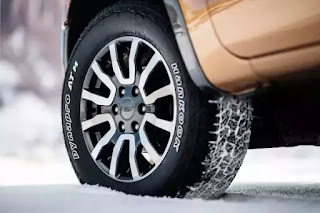 The FX4 Off-Road package could give some of the Ranger's competition pause. It includes the expected off-road tuned shocks, locking rear differential, skid plates, and hill descent control system. But the Hankook Dynapro AT white-letter tire-and-wheel combo seems to have more wheel, less sidewall, and a tamer tread than we'd like to see. The tire-and-wheel setup is not wholly unexpected, and it should at least perform well and remain quiet on paved roads during the week. They fill out the fenders nicely to produce a terrific-looking stance, too.

Beyond that, the FX4 also sports a pair of advanced traction management features that have so far been the exclusive midsize pickup territory of the Tacoma TRD Off-Road. Setting aside the default Normal mode, the Ranger's Terrain Management System allows the driver to optimize the traction control and throttle response for three off-road scenarios: grass, gravel and snow; mud and ruts; and sand. We can't help noticing that a "rocks mode" is conspicuously absent, however. But the Ranger FX4 also has something called Trail Control, which works uphill and on uneven level ground. Essentially, it's a low-speed off-road cruise control that manipulates the throttle and manages wheelspin so that the driver can concentrate on choosing the best line over and around obstacles. We don't yet know if this system has the smarts to dig itself out of deep sand the way the Tacoma's can.

To be clear, the FX4 package is not intended to go head to head with the Chevrolet Colorado ZR2. That task is reserved for the so-called Ranger Raptor. It has been teased in videos that suggest a much more powerful engine, wide-body styling, and significant upgrades to the suspension and tires. Ford will surely get into the specifics at a future date. 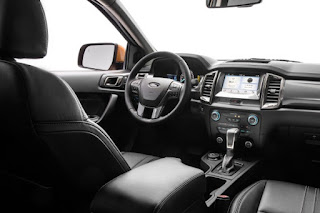 Inside, the Ranger presents the driver with a logical and functional array of instrumentation and switchgear. A rotary knob controls the state of the 4x4's transfer case, and it includes a neutral tow mode to enable four-down towing behind a motorhome. Buttons to enable Trail Control and hill descent control and the locking rear differential are nearby. The 10-speed's console shifter employs a straight-pull design, and that dooms manual mode control to the kind of thumb-operated rocker switch that we find irritating, all the more so with 10 gears to sort through. 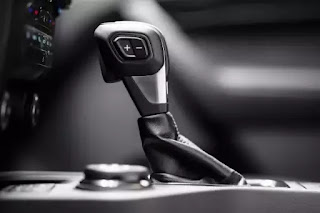 The centerpiece of the infotainment system is Ford's impressive new Sync 3 architecture, and among other things, that means the Ranger will support Apple CarPlay and Android Auto. There are two console-mounted USB ports. Other options include Ford+Alexa enhanced voice control, built-in navigation, and a B&O Play by Bang & Olufsen premium sound system. Our main misgiving has to do with the smallish size of the screen itself. Whether it means anything in real life will have to wait until we get behind the wheel on a bumpy road.

Automatic emergency braking comes standard across the Ranger lineup. Move one step up to the XLT and the list of standard active safety features includes lane departure warning with lane keeping assist, a reverse proximity alert system, and a blind-spot monitoring system than can be configured to account for an attached trailer. Take another step up to Lariat and you'll also get adaptive cruise control and enhanced automatic emergency braking with pedestrian detection. 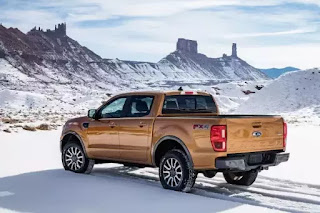 All this adds up to a 2019 Ford Ranger that could be an instant hit, especially among Ford fans who drifted away to other brands when Ford vacated the midsize truck segment. Their long wait is going to persist a few months longer, however, because the new Ranger isn't scheduled to go on sale until late this year. We're sure to learn more in the coming months, and Ford might yet reveal some surprises it hasn't shown off just yet — a second engine, perhaps? We also expect to get behind the wheel before the Ranger appears at dealerships. Keep an eye on Edmunds for more updates and a full review of the 2019 Ford Ranger in the months to come.
2018 Ford Ranger20192019 Ford2019 Ford Ranger2019 RangerCarEdge STFordFord Edge STFord RangerFord Ranger PickupFord Ranger RecallFord RaptopNew Ford RangerRanger 2018Ranger Raptor
Comments