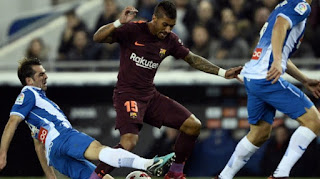 In the first leg of the Copa del Rey quarter-finals on Thursday (18/1/2018) early morning, Barcelona must be 0-1 defeat of Espanyol.
Shown as a guest team at the RCDE Stadium, did not preclude Barcelona to directly hit the Espanyol defense in this 178th Catalunya Derby .
Lionel Messi remains the center of Barcelona's attack on this fight.

The Argentine has to be broken several times by an Espanyol player who wants to stop the 30-year-old man's movement.
Although several times threatened mainly through Paulinho and Lionel Messi.

Discipline of  Espanyol defense throughout the first half to make El Barca difficult to score goals.

Score 0-0 was ended the first round at the RCDE Stadium.
In the second half Barcelona coach Ernesto Valverde enter Ivan Rakitic and Luis Suarez to add to the power of knocking the team.

Not to loosen the attack, Barcelona actually had a golden opportunity to excel in the 63rd minute after getting a penalty.
Gifts received Barcelona penalty after Sergi Roberto was dropped Granero in the penalty box.

Unfortunately penalty which was then taken by Lionel Messi failed to produce goals after the Argentine player's kick was successfully pushed over Diego Lopez.
After the failure of penalty Lionel Messi, Espanyol began to develop the game and several times threaten Jasper Cillesen goalkeeper through Marc Navarro free kick.

The home side finally able to open the advantage in the 88th minute through substitute Oscar Melendo after utilizing bait Marc Navarro.
Behind one goal Barcelona tried to equalize.
But until the game ended El Barca failed to equalize and the score remains 1-0 for Espanyol advantage so the referee blew the long whistle.
Espanyol 1-0 victory is a valuable capital troops Quique Sanchez to undergo a second leg at Camp Nou on (26/1/2018).