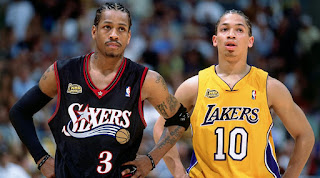 CLEVELAND -- Ask Tyronn Lue who is the best team in the Eastern Conference and he'll tell you it's his Cleveland Cavaliers, no matter how rough their recent struggles have been.

"Because we've got the best player in the world," Lue said before the Cavs lost to the Golden State Warriors 118-108 on Martin Luther King Jr. Day.

He's referring, of course, to LeBron James, the four-time MVP and three-time champion who was averaging 27.1 points, 8.8 assists and eight rebounds this season entering Monday.

As Lue's pregame media conference continued, perhaps the coach had a moment to reflect on the Cavs' current spot in the standings: third in the East; seven games back of No. 1 Boston and four games back of No. 2 Toronto -- two teams that thoroughly handled Cleveland on its recent five-game road trip in which it finished a paltry 1-4.

He then adjusted his rating of the Cavs.

Warriors coach Steve Kerr said James' presence on the Cavs always makes them a threat in the long run.

"I am very aware that they have LeBron," Kerr said during his pregame remarks. "Every year, every year. We've played them in the [NBA] Finals three straight years and I guarantee you there was a moment like this in all three seasons -- at least one, sometimes more. So we know. He's always going to get the ship righted and what happens now has nothing to do with what happens later."

Kerr added that James has improbably improved from his already-elevated level of play during this second stint with the Cleveland since returning in 2014.

"I know he's better now than he was four years ago," Kerr said. "That's insane when you think about that because that should've been his prime -- four years ago. And he was already an MVP and a champion. But he's better. He's a better shooter, better player. He keeps getting better. I believe him."

Lue said the Cavs' recent struggles can be linked to Isaiah Thomas being integrated into the lineup after a 7½-month layoff from a hip injury, but Cleveland will manage that as Thomas will improve with more opportunities.

"I think working I.T. back has been tough, because he had a minute restriction and then he's going back and playing with the second unit when they had a good rhythm going," Lue said. "So now his minutes are starting to increase. It's just been a tough time to try and figure out the minutes and get him off the floor at the right time, and right timing and different combinations. But, you know, we'll figure it out."

Kerr said that anytime the Warriors play the Cavs -- the team they've faced in the NBA Finals for an NBA-record three straight times -- it matters a little bit more.

"It will be emotional no matter what," Kerr said. "I'm sure it gives them more of a sense of urgency to come back and start playing better than they have. Sometimes this is the best thing for a team that's struggling is a rivalry game, get the blood going. I expect them to come out and play a lot better than they have been these last couple weeks."

"There's an awareness that nothing is decided in January," Kerr said. "Anybody who's been in the league knows that whatever happens now has nothing to do with what happens in June, but there's just a special feeling when you play against each other when you've got this kind of rivalry. There's 82 games, but certain games you circle and you get more excited for, and this is one of them."
CavsCavs gameCavs vsCavs vs WarriorsCavs vs Warriors Live Stream FreeCavs WarriorsCavs Warriors Live Stream FreeCavs Warriors StreamNBANBA CavsSportWarriors
Comments