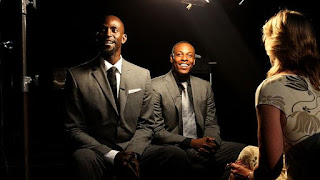 It’s not a secret that there is no love lost between Ray Allen and the rest of the Celtics’ 2008 championship team, including Paul Pierce. But deep down, you feel like there’s a chance Allen would show up for something like a jersey retirement ceremony for Pierce.

Well, that isn’t the case. Instead of attending Pierce’s ceremony, he went golfing with George Lopez.

Congratulations to my man @georgelopez for his second ever hole in one. @therealchrisspencer @thewerth #happysunday
A post shared by Ray Allen (@trayfour) on Feb 11, 2018 at 10:05am PST


Meanwhile, Rajon Rondo, Kevin Garnett, and even Doc Rivers made the ceremony.

Why wouldn’t Allen show up to Pierce’s ceremony?

There was a longstanding beef between Pierce and Allen that was supposedly squashed this summer in 2017. It stemmed from Allen leaving the Celtics and moving to the Heat in 2012. On Area 21 last May, Pierce and other Celtics expressed their displeasure with Allen’s choice years after the fact.

“It was more than basketball for us… It felt like a sour breakup.”

“I was initially hurt by the whole way everything went down. ... I just figured if it was me leaving, I would have [called each player and said] ‘this is what I’ve been thinking about,’” Pierce said during on Area 21. “That’s what I was hurt by when Ray didn’t at least give us a heads up about it. And then, to go to the team [that we were competing against.] I think I would have took it better if he just talked to us about it.
“But I just felt like we should have had a conversation, and it was have settled over a little bit more. I don’t think we would have been as salty. ... I just think if we would have talked about it, it would’ve been a little different than it is now. Now it’s uncomfortable. I haven’t talked to Ray in some years now. It’s just different.”


But in September, the two got together and seemingly squashed things. They took a picture together, and Pierce’s Instagram caption talked about moving on from their past.

Time to get the band back together @trayfour #burythehatchet @tic_pix @rajonrondo no matter what happen we all formed a special bond that can never b broken #onceacelticalwaysaceltic
A post shared by The Truth (@paulpierce) on Sep 9, 2017 at 8:44pm PDT


So it’s weird not seeing Allen there despite the relationship between the two seemingly being repaired.

Keep in mind, though, that him not being there doesn’t necessarily mean that things are not fine between the two. But you’d think that, if things were truly fine, Allen would show up to support a former teammate and Celtics legend.