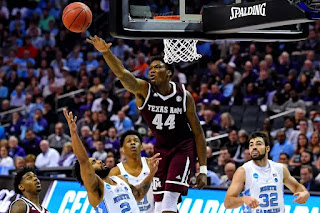 CHARLOTTE —The past two seasons for the North Carolina Tar Heels ended with confetti falling on their heads, first as Villanova celebrated in front of their eyes and next with redemption against Gonzaga.

This season ended with Tar Heel walk-ons on the court and the Texas A&M band playing the school’s fight song at the buzzer. The Aggies spanked West’s No. 2 seed in a city that’s always been friendly to UNC, winning 86-65 to give North Carolina only its second NCAA tournament loss in its past 14 games.

Carolina had no illusions about this A&M team. Head coach Roy Williams called the Aggies “maybe the biggest team I’ve ever looked at” Saturday, and they have four players in their rotation at 6’8” or taller, including three starters. A&M’s physical superiority was on display throughout the game and was clear on the stat sheet: the Aggies outrebounded the proud Tar Heels 50-36 and won the blocking battle 8-nil.


Signs of trouble for the defending champs started midway through the first half after Carolina took a 20-13 lead. A&M got noticeably more aggressive and confident and North Carolina forgot how to shoot. In a seven-minute stretch, UNC went 0 for 8 from the field with three turnovers and saw its seven-point lead turn into a 10-point deficit.
This was when Tyler Davis got engaged in the game. He started 0 for 2 from the field as he tried to figure out how the Tar Heels would guard him. Head coach Billy Kennedy took him out for a few minutes and, when Davis returned, he finished the half 5 for 5 from the field for 13 points.

“He went and then got it on the glass. He had some offensive rebounds, some effort plays that really sparked us and sparked him, the effort plays he made,” Kennedy said of Davis, who finished with 18 points and nine rebounds. “That's what he's done all year. That's why he's first-team all-SEC. He's been the leader and the most consistent player on our team all year with his effort and his attitude and his work habits.”

Carolina was a paltry 1 for 13 from 3-point land in the first half, opting to die by the 3 rather than going inside against A&M’s bigs. A 42-28 deficit at half would only grow as A&M came out hot, hitting three 3s before the first media timeout while UNC was 0 for 4 from behind the arc in the same span.

Sunday was only the second time in 36 NCAA tournament games in the state of North Carolina where the Tar Heels lost. Furthermore, it was the first time in team history the Heels dropped a tournament game in the city of Charlotte in 13 games.

Every sign of life was greeted warmly by the pro-Carolina Spectrum Center crowd just to be let down shortly after. Joel Berry finally hit a 3 with 9:30 left in the game and the Carolina faithful rose to their feet. Then T.J. Starks sliced through Carolina’s defense for a layup off glass that got the lead back to 21 points.

“We knew we needed to keep attacking,” said Kennedy, who takes A&M to its fifth Sweet 16 in program history and second in three years under his direction. “Sometimes you play back on your heels. We kept attacking and that's the kind of guys we have, we have some—when—especially when they're as confident as they are right now, we kept attacking.”

The last glimmer of hope for the defending champs came with less than six  minutes remaining. Down 18, Cameron Johnson got a steal and passed ahead to Theo Pinson, who eurostepped to the basket just to get blocked by Tonny Trocha-Morelos. If that wasn’t deflating enough for the Heels, D.J. Hogg collected the block and rifled a pass to Robert Williams, who was smiling as the ball was in the air.

Williams capped the Providence win Friday with a windmill slam that had been mimicked on the sideline perfectly by Aggies teammate Savion Flagg. He loaded up Sunday night for another to put Texas A&M up 20 again.

“I looked at the whole bench. I wanted to take it between my legs this time but [then] I saw Coach Kennedy.”

This was Carolina’s earliest exit since losing to Iowa State in this round in 2014, the season before outgoing seniors Joel Berry and Theo Pinson arrived in Chapel Hill. The past four years have been trying for the Tar Heels amid an NCAA investigation that seemingly had no end. Back-to-back title game appearances preceded the college sport’s governing body’s October decision not to sanction Carolina basketball for any academic violations.

And all of Williams’ end-of-season emotions were on display. His eyes were red and he kept wiping his nose at the postgame press conference as he sat beside Pinson and Berry one last time. It wasn’t supposed to end this way for Carolina, and Williams is going to miss those rascals.