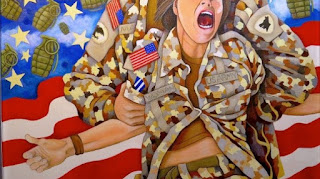 PENTAGON - US Investigation Center are investigating the case embarrassing slap the US military.

Unmanned photographs of hundreds of women members of the US military are spread on social media.

This scandal inevitably re-shake the US military which last year also faced a similar scandal.

A report from Vice News last week said a secret Dropbox account contained hundreds of nude photographs of US female soldiers from five branches of the armed forces.

"It has been reported through NCIS and appropriate action has been taken," said Christopher Harrison, spokesman for the Marine Corps, told the Military Times.

In the Dropbox folder named "Hoes Hoin", there are 267 images in its entirety and three subfolders for certain female categories.

There are also some swafoto and pictures taken by others.

Facebook has closed the group after a Marine Corps veteran, Erin Kirk Cuomo, reported the activity.


Cuomo who was also one of the founders of #NotinmyMarineCorps, an advocacy group, was disappointed by the military failure of identifying and closing the group.

This is the second time the US Marines have been dealing with a nude photo scandal.

Hundreds of thousands of nude pictures were shared that led Congress to pass legislation on improper dissemination of imaging images in December 2017.

The act of sharing and spreading the image is a criminal act.

Perpetrators may be subject to military punishment and dismissed disrespectfully.

A total of 97 marines who were involved in the scandal have also been tried.

Funds amounting to 18 million US dollars disbursed to handle the nude photo scandal so as not to spread more widely.

"However, as the social media platform continues to grow, the challenge remains to be vigilant and to identify victims of cyberbullying and offenders," he said.

Meanwhile, a Dropbox spokesman said the link containing the image had been removed.

"If we find a violation, we will revoke the content and if necessary, will take other actions, such as prohibiting that content and or reporting to law enforcement," he said.