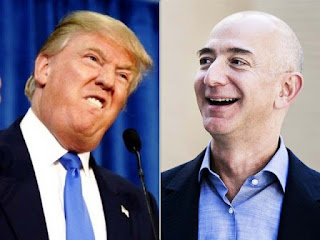 Trump once again accused Amazon of taking advantage of the US Postal Service, and he suggested that Amazon does not pay its fair share of tax. In fact, Amazon pays the same lower rate that the post office charges other bulk shippers, and it collects sales tax in every state that charges it.

Only fools, or worse, are saying that our money losing Post Office makes money with Amazon. THEY LOSE A FORTUNE, and this will be changed. Also, our fully tax paying retailers are closing stores all over the country...not a level playing field!
— Donald J. Trump (@realDonaldTrump) April 2, 2018


Trump has tweeted about Amazon four times in the last week.

Apple (AAPL), Amazon (AMZN), Google (GOOGL), Microsoft (MSFT), and Facebook (FB) made up nearly a quarter of the market value of the entire S&P 500 as of the end of February. They contributed to the market's climb last year. Amazon gained 56% in 2017.

Trump's attacks could "keep a lid on the stock short term, but long term there's no real change to our positive thesis," he said.

Anthony DiClemente, an analyst at Evercore ISI, agreed that the fundamentals behind Amazon haven't changed and there were no signs that Trump's tweets had discouraged customers from shopping on the site


Bill Smead, who runs Smead Capital Management, said he believes the company's price tag is unsustainable (he doesn't own the stock).
Amazon's price to earnings ratio, a measure of how expensive the stock is compared to every $1 of earnings, sat at 223. The average ratio on the S&P was 27.5.

"It is absolutely inevitable that at some point the very, very high multiple that gets attached to them becomes a curse," Smead said.