Najwa S. Friday, April 6, 2018, April 06, 2018 EDT Last Updated 2020-04-01T12:10:45Z
The mainstream may love Cardi B, but Cardi is not courting the mainstream with her debut album. Instead, Invasion of Privacy, which is a reference to a lyric in which she posts the naked pics a girl sends her man on "Thru Your Phone," leans hard into hip-hop. 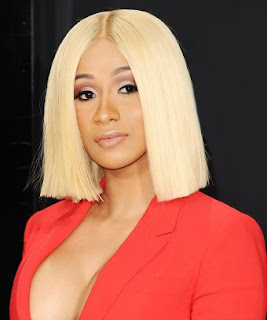 Cardi's verses are the highlight in every track; she never misses a chance to be the star. Her near constant references to luxury brands make the style feel a little older, as does her use of old slang ("hoes down, g's up") and older pop culture figures (the infamous temper of Lisa "Left Eye" Lopes gets a shout out. But that luxury label lifestyle is undoubtedly reflective of her post-"Bodak Yellow" lifestyle and success — Invasion went gold on release thanks to sales largely from that track before its release. Ironically, it's on "Bodak Yellow" where she preaches that you can keep your money by staying on a budget. And those old references, they're to back up her place in and reverence for hip-hop figures past.


They show that she knows her history, and signaling that demands respect from 'heads along with her desire to be part of it. She also references waist trainers, the exclusive territory of Kardashians and Instagram influencers, and her past as a stripper, saying about the latter, "'Fore I fixed my teeth, man, those comments used to kill me / But never did I change, never been ashamed / Never did I switch, story stayed the same."


Cardi tells her story in a totally uncensored way on Invasion, telling us about her decisions both good and bad, and lays bare her flaws, weaknesses, and strengths. She seems to detail a lot of her relationship with Offset, from the good (where she name checks him) to the bad (where she doesn't, but cheating is a recurring theme).


It's not the production that makes this a Cardi B album. There's no singular Svengali pulling her strings here: the through line is Cardi herself. It shows in the sequencing, which front loads the album with hardcore tracks heavy in brags and dropping name brands rather than singles with strong choruses, which are relegated to the end. For better or worse, this is singularly Cardi B's vision and that's something not a lot of female artists can say about their debut album.